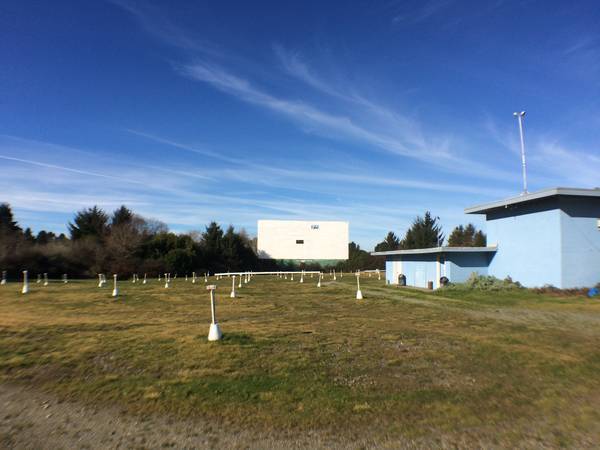 The Ocean Drive-In was opened in August 1952 with Tony Martin in “Two Tickets to Broadway” & John Payne in “Passage West”. It was renamed Red’s Crescent Drive-In in 1980. This drive-in has a capacity for 300 cars. It was closed in 2015.

Google map for this location shows nothing but open fields.

Do they still operate any speakers?

Help! Please vote for this theater on projectdrivein.com Honda will pay for new digital projectors for the theater with the most votes.

Reds is up for sale, it is listed on Craig’s list.

The info I have for Red’s. Originally opened in 1951 or ‘52 as the Ocean drive-in. Bought by 'Red’ Thomas in 1980 and changed names to Red’s Crescent drive-in. They bought out the Terrace drive-in up north in 1959, and that was the first ‘Red’s’ drive-in. That drive-in Brookings closed down the fall of 1980 due to windstorm. Both screens blew down & they were only able to rebuild in Crescent City.

Red’s Crescent is now closed for the 2015 season. They were not able to convert to digital and I doubt they can open up next year. According to a Facebook post, the land is set to become a storage facility.

Opened in 1952 as Ocean Drive-in with “Two tickets to Broadway” and “Passage west” sold to the Thomas family in 1980 and renamed Red’s Crescent Drive-in. The drive-in has been demolished(date unknown?). Site is nowa storage facility.

An approximate opening date. Boxoffice, Aug. 16, 1952: “The grand opening of the Ocean Drive-In was held recently. A total of 450 cars may be accommodated at the ozoner, located five miles north of (Crescent City) on Wonder Stump road off Highway 101.”

Boxoffice, Jan. 16, 1954: “The Ocean Drive-In at Crescent City was sold by Jacob A. Leech and Richard Miller to Arthur Grenfell.”