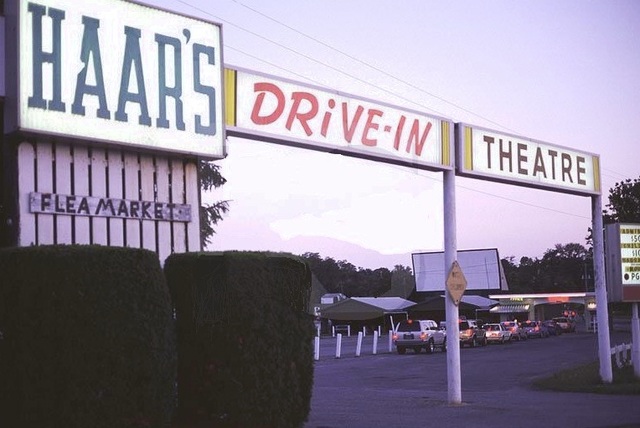 Haar’s Drive-In opened on June 18, 1953 with George O'Brien in “Gold Raiders” & Bud Abbott and Lou Costello in “Africa Screams” and remains open today. It has a capacity for 500 cars.

The new screen sure shrunk in size.

Smaller in size and no longer in the 2.35:1 ratio for wide screen “Cinemascope” formatted movies without cropping top and bottom or the sides.

Vance Haar and the family were the owners of the drive-in, as well as the adjacenet auction house and roller rink.

Haar’s leases its land, and that landowner has put up a For Sale sign. Nobody has been able to get the landowner on record, but Haar’s’s (how do you type that?) owner Vickie Hardy said she was “completely caught off-guard” by the development. WHTM ran a news story with plenty of great views of the drive-in.

would be a shame if it closed.

There is already a Change.org petition called “Save Haars Drive-Movie Theatre”

And yet again, the big-box money A-holes take another piece of our memories. Where was GIANT foods when my buddies and I were at the Drive-In watching the movies we embraced and loved! Getting ready to take over and run their F-ing robot through the aisles.

New Owner has granted the Haars family a 10 year lease so the Drive In is safe for now. https://www.pennlive.com/life/2021/04/businessmans-emotional-purchase-will-allow-haars-drive-in-to-keep-making-memories-for-area-residents.html