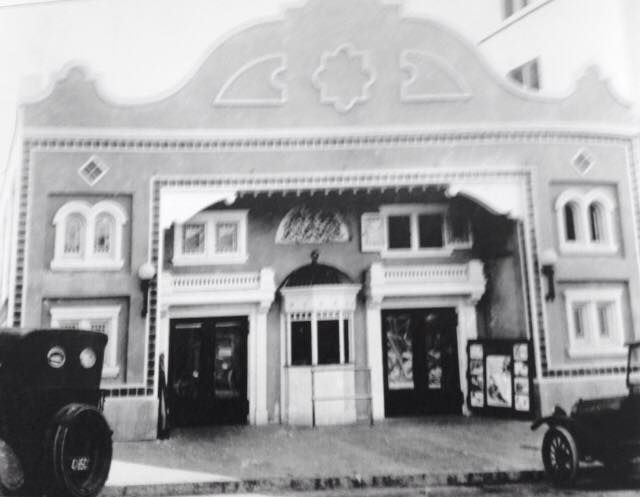 Built and opened in 1922 as the New Dreka Theatre, it was named after George Augustus Dreka who had opened a department store on an adjacent lot.

It was being operated in the 1940’s by E.J. Sparks as a subsidairy of Paramount Pictures Inc. together with DeLand’s other movie theatre, the Athens Theatre. By 1954 the Dreka Theatre was operated by the Talgar Theatre Company chain and they closed it in 1956.

Mapquest puts this location as E. New York Avenue. I would say that if a tour is looking at a ‘site of’, that to me means ‘stood here’ and is not here any longer. I would presume the Dreka Theatre has been demolished.

During rides through DeLand when I was a child during the 1940s and 50s, I would always glance down the street (from US 17) to see the Dreka. It had a marquee made of glass; the only one I’ve ever seen. It appeared to be a secondary theatre (to the Athens).

The Dreka Theater closed in 1957. Its last movie was an Audie Murphy film, “To Hell and Back.” In the 30s and 40s generations both old and young attended the double-feature Saturday matinees which always included a cowboy movie, a mystery or comedy, at least 2 cartoons, and a weekly serial such as “Flash Gordon.” Tickets for kids under the age of 12 was 9 cents. After it closed, the stage was filled in and the building renovated. Today it houses the Orange Belt Pharmacy.

The address is 112 E. New York Avenue. The pharmacy was recently bought by the Walgreens chain.

Any photos would be great to see. Irv told me that the marquee was made of glass which is quite unusual. Too bad that wasn’t saved!

Lost: Great site…thanks….again to our number one CT member!