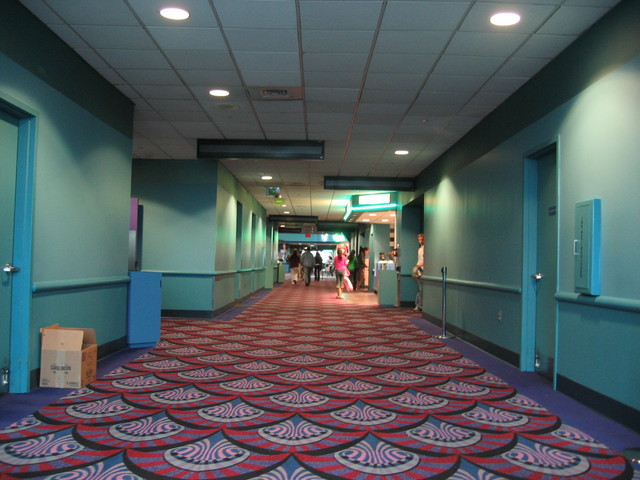 The College Point Multiplex theatre, situated on the Whitestone Expressway, was opened on May 14, 1999. Contrary to the newspapers listing of Whitestone (and the name of the theatre itself), the big box is located in Flushing, NY. As for the theatre, it is typical of other National Amusement theatres - twelve screens and nothing on! They tend to show forgettable action films and childrens films. The action films are repeated on two or more screens. You would not be able to find any indie movies (or Fox Searchlight material) at this outlet. On occasion one can find TWO good films among the usual action formulas.

It should also be noted that this is the closest theatre to the #7 terminus in Downtown Flushing (a ten minute walk from the tragically shuttered RKO Keith’s Theatre). Needless to say this threatre could never replace the RKO Keith’s Theatre. However, the theatre was part of the College Point Corp Park renewal program. National Amusements built their theatre several years after the closing of Adventures Inn (a story in itself). I suppose it is better that a big box theatre should exist rather than a mini amusement park that fell into disrepair.

Thanks Lost… Guess I got confused as to the location of a couple of those smaller theaters. Theaters 4 and 9 are at the far end of their respective halls and not near center lobby (as 1 and 12 are). In any event, those 195-seat rooms are definitely on the small side – particularly in comparison with the other auditoriums. However, because of the great spacing between each row and the comfortably wide seats, I’d have to say that these seating figures make each room seem much smaller than it actually is.

Ha… OK, Lost! I’ll try not to be too conspicuous.

Pay no attention to the man in the corner with the pencil and scratch pad!

ask to see the usher schedule and they put the seats of each aduitorium. I know the other National Amusement theatres put the seat count in screen order

I like this theatre too. My only gripe is the ticket counter is usually poorly manned and the service is very slow. Normally I avoid the crowds by using the ticket kiosks but one machine was broken the last time I was there. I tried to report a malfunction to the clerks at the ticket counter but they seemed to have more than they could handle and ignored me.

I think the description was a bit too critical. I grew up on this theater before we moved. When we used to live in Flushing, NY, this was the place to go. Good concessions, mostly good auditoriums, and I remember there was also a Ben & Jerry’s here.

I went to the College Point Multiplex Cinemas for the first time in 1999, around when it opened, I think. The earliest film I remember seeing there was “Toy Story 2”, and if I’m not mistaken it was also shown in the then-new Dolby Digital Surround EX system (matrixed rear center channel, essentially). I was only four years old, and even then I was dazzled by the beautiful dye-transfer 35mm print and spacious Dolby EX sound.

Ever since then, this theater played a big part of my childhood, be it kids films, event films, adult films (that some I walked out of), Pixar films, pretty much any film a child growing up in the early-noughts would want to go to.

If I’m not mistaken, this cinema was also THX-certified for a short period of time, around 2005, I believe. But during that time, they never played a THX trailer, and the quality paled in comparison to the Loews Auditorium at the Loews Lincoln Square 13 & IMAX (now AMC). Even without THX, this was a decent place that showed first-run films in 35mm Dolby Digital (and EX in some auditoriums). A casual moviegoer couldn’t ask for more.

In 2008, one of the auditoriums was converted to digital for the wave of 3D films coming. I am unsure about the equipment used in this auditorium, but it had RealD technology. I have tons of RealD glasses with the old RealD logo from this theatre (and I also think Regal Countryside 20) before they started to tell the audience to recycle their glasses. Ever since I moved in the fall of 2008, I never got to see that theater again, until two years later.

In the summer of 2010, while visiting New York, me and a couple of friends saw “Despicable Me” in 2D at the College Point. It was opening night, last showing, and the 35mm print that was used looked older than a week to me! I mean, if a print has been showing for a week and looks like that, that would be fine, but this was on opening night! Probably earlier showings on that day looked better, but that was when I realized that College Point Multiplex was degrading in their 35mm presentations. Possibly to make way for D-Cinema, I guess.

On the same visit, I saw “Toy Story 3” in 2D with my dad one afternoon. As for the print, it seemed to have degraded, but worse since this film was a month old. I think during the last 20 minutes, the Dolby Digital track dropped out and it went to the backup Dolby SR track, that’s how bad the projectionists ruined it. Nonetheless, this was the last film I ever saw at the College Point Multiplex, and a very fitting one since it symbolizes the end of childhood, and my childhood with the College Point Multiplex, once a fine place for exhibition, has ended. Even more so fitting when the previous film in the series was the first film I saw there.

In 2011, looking back at it now seeing how it is, I learned that the entire theater has been converted to digital, with Sony 4K projectors. This isn’t a bad thing, unless they don’t do it right. This made me worry about a special National Amusements feature presentation trailer that has been so dear to my heart every time I visited the theater. I highly doubt that trailer will ever be converted to DCP, as it has been used as early as 2000-2001 I think, and the College Point played it in front of all their 35mm shows since then, even “Toy Story 3.” If I can describe it, it began with a light at a center, and little peepholes of light appeared one by one, each one appeared faster like a crescendo. All the light coming out of the peepholes formed the big N logo of National Amusements, and a byline reading this appears:

The soundtrack of the bumper was pretty cool. It demonstrated the power of a sound system in those shoebox multiplex auditoriums.

I’ve got the word from one of my NY friends that they still play this trailer in 2011, but only on film presentations. He also says that the digital auditoriums sounded worse than the film ones, which should have been the opposite. It’s kind of sad.

The College Point Multiplex lost its original splendor and now it’s just “another multiplex that enjoys to eat the patron’s hard-earned money and give them either the poison of scratched-up 35mm prints, or poorly-EQ’d uncompressed PCM audio that sounds compressed.”

Your soul is dead, but Satan eats your caresses.

Went to this theatre to see Hotel Transylvania in auditorium #4. The presentation was in RealD 3D and Sony 4K. They played a Sony Digital Cinema 4K snipe before the film, something I haven’t seen in a theatre before. This multiplex, or at least the auditorium I went in, was poorly EQ’d. Too irrative and loud, trailers before the film were too loud.

The Feature Presentation trailer I’ve mentioned earlier was replaced by a generic trailer that no longer bears the National Amusements name, but is immortalized albeit Showcase Cinemas.

As per their website, recliners are being installed next year here and in Yonkers..

For the celebration of Black History Month, a Fundraiser Event will be held here at the College Point Multiplex on Sunday, February 23, 2020 with a showing of the film “Just Mercy” with Jamie Fox. It is being sponsored by the Deaconess Board and Women’s Ministry of the Philadelphia Church. All attendees will also get a gourmet goodie bag with the reservation. Limited seating is available so e-mail for tickets for this event. No tickets will be sold at the box-office so if you want to join us e-mail Meghann as soon as you can. We will notify you here when we reach the cinema capacity and cut off sales at that time. So come on down to the College Point Multiplex for a great start to your Sunday activities. You can order tickets today. When you obtain your tikets directions to the College Point Multiplex are at the top of main page of this Multiplex. Don’t miss it!