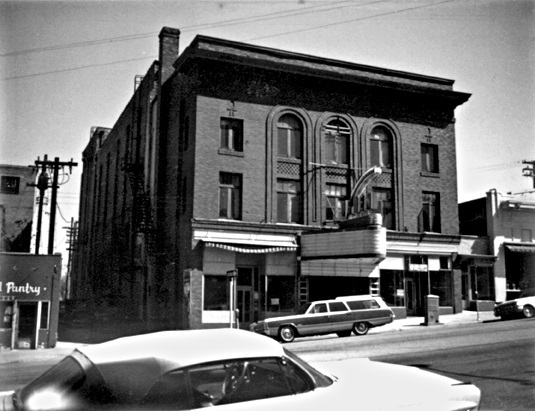 According to a newspaper article at the time of its opening in late-1909, the Ogden Theatre initially was operated by the Utah Theatre Co., an organization comprised of Ogden people and prominent theatre investors from around the country. “The Ogden Theatre, which represents an outlay of about $100,000 was built by the D.H. Peery Estate”, the article reported. David H. Peery had died, leaving his sons Harman & Louis in charge of the estate’s business. “The work upon the structure, which is entirely new, save one wall…” (a remnant of the old Utahna Theatre, the prior structure at that location) was completed in less than four months.

Architect for the new playhouse was E.W. Houghton. Aiding Houghton was architect Leslie S. Hodgson who would go on to design Peery’s Egyptian Theatre, followed by many of Ogden’s great buildings including the Municipal Building and the Art Deco style jewel of the city – Ogden High School. The new theatre seated about 1,000 on the main floor and two balconies. “Every detail has been worked out and there is not a theatre in the west that is better appointed” the newspaper declared. The theatre was fitted with finery throughout. “There is not a pillar or post to obstruct a full view of the stage…” “Back of the scenes one is face to face with every modern convenience one could call to mind. The dressing rooms for the performers have every want supplied, hot & cold water, large expensive mirrors, myriads of lights as well as lots of room and comfort. The scene rigging is of the most modern type”. A detailed description of interior décor was not included in the newspaper article, nor has any related information been discovered elsewhere.

A road company entertained first-nighters with a play entitled “Commencement Days”. The grand opening orchestra was composed of Ogden musicians, aided by the Colonial Orchestra of Salt Lake City.

In April 1914 Harman Peery announced the D.H. Peery Estate “purchased interests in the Utah Theatre Company, taking immediate control and management of the Ogden Theatre”. The theatre soon converted to movies only, and the second balcony was sealed off. In the depths of the Great Depression, the Peery’s opted to lease their Egyptian Theatre and the Ogden Theatre to fledgling Twentieth Century-Fox under the banner of Fox Inter-Mountain Theatres. The Peery family would never again operate either property. Fox brought in Ted Kirkmyer as city manager. He recalled things being so depressed in the area that bartering for commodities was very common.

Then came World War II. Movie business boomed, and with over 125 passenger and troop trains stopping daily at Union Station, the Ogden Theatre and the city’s four other theatres were packed and prosperous. As the 1940’s ended, the introduction of drive-in theatres brought new competition to the downtown movie houses. Though drive-in’s were restricted to 2nd-run pictures, people loved piling into the car and heading off to the Motor-Vu Drive-In, Riverdale Drive-In, Mt. Ogden Drive-In and the Starlight Drive-In. Compounding the woes of indoor theatres was an even more ominous threat, Television.

By the mid-1950’s, the Ogden Theatre was showing move-over hits from the Egyptian Theatre, and many films from a new company American International Pictures. The fledgling outfit specialized in low budget sci-fi and horror double features, including such titles as “I Was a Teenage Werewolf”, “The Wasp Woman” and “The Invasion of the Saucer Men”. The Ogden Theatre occasionally ran ‘art’ or foreign films, but the real money-makers were weekend Spanish-language pictures appealing to the area’s large migrant work-force. On a given weekend, the Ogden Theatre playing double-feature Spanish pictures could turn a bigger profit that would the Egyptian Theatre showing top, first-run mainstream films. Occasional wrestling matches were staged there, and The Ogden Civic Theatre presented yearly series of plays for a time.

When drive-in theatres began to show first-run pictures in the new decade, the Ogden Theatre was closed in 1966 after 56 years of entertaining Northern Utahns. The building was demolished in the summer of 1968. Nobody seemed to notice, or care.

Listed in the Film Daily Yearbook, 1941 as having 1,000 seats. It was operated by Fox Intermountain Theaters Inc.