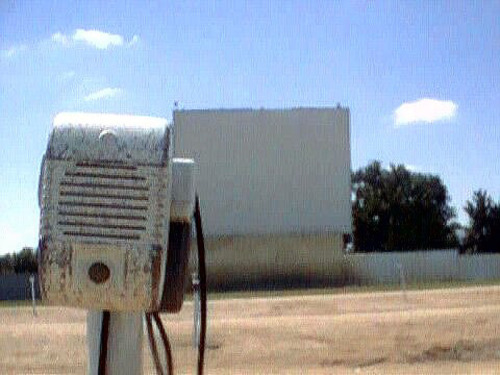 I think with two different addresses, zip codes and phone numbers, that there is one in Iola and one in Gas City. Coincidentally they’re both called the Iola 54.

Going by Cinematour’s information, the Gas theater is the B&B Iola 54 Drive-In on 2200th Street. It was also called the Gas City Drive-In. The other theater, the 54 Drive-In in Iola, is not a B&B theater. The name was probably taken from the fact that the drive-in was on Route 54 in Iola.
http://www.cinematour.com/theatres/us/KS/2.html

You may be right. I looked at some other sites, and they had made comments concerning the fact that they could not pin down the location of the 54 in Iola. Additionally you can map 2200th Street to either Gas or Iola.

I would think the fact that it is still open would end the mystery. Can’t someone just call there and ask if they are/were the only Iola 54 Drive-In?
Surely they should know if they have/had a 2nd location or any competitors of the same name.

I have driven by this drive-in, and can confirm that there is really only one drive-in, and it is located on U.S. Highway 54 in the small town of Gas (not Gas City) just outside the much larger town of Iola.

My 1956 Motion picture almanac has it located in Iola,So I guess Gas must be a nearby town.I have it owned by Jack Hastings .

Ok everyone! I just happened by this site because I was trying to find showtimes for the 54 Drive-in. I signed up for an account just so I could clear up some confusion. First of all there is only one drive-in. It is technically located in Gas, KS (previously known as Gas City, why the change??? Who knows) Now days there really isn’t that much difference between the town of Iola and Gas…they are 2 miles apart if you want to get technical. You could say that Gas is a suburb of Iola. Most of the locals (including myself) refer to the drive-in as the Iola drive-in, not Gas. That might be why there was confusion about one or two drive-ins. The Drive-in, the last I knew is owned by B & B Theaters who also owns the movie theater in Iola and Chanute and others in Kansas and other States. It is located on highway 54 and the corner of a country road. The country road may be 220th rd as was listed in a previous post. I’m not sure. Highway 54 goes straight thru Iola and Gas and is known as “The Yellow Brick Road” from “The Wizard of Oz”. I have seen many a movie here and drove by it on a daily basis growing up. I hope I helped clear up some of the confusion. If you need anymore info call the Sterling 6 theater in Iola, KS 620-365-2255

So it should be listed as closed? Looking a aerial there is nothing there except a empty field.

FYI from the look of early historical aerials, this theater when it opened was actually on Hwy 54 (East 1st St). Sometime during its history, the drive in entrance moved from the highway to 2200th Street and a residence was built over the original entrance and exit roads. If you look carefully, there are still remnants of those roads on either side of the residence.