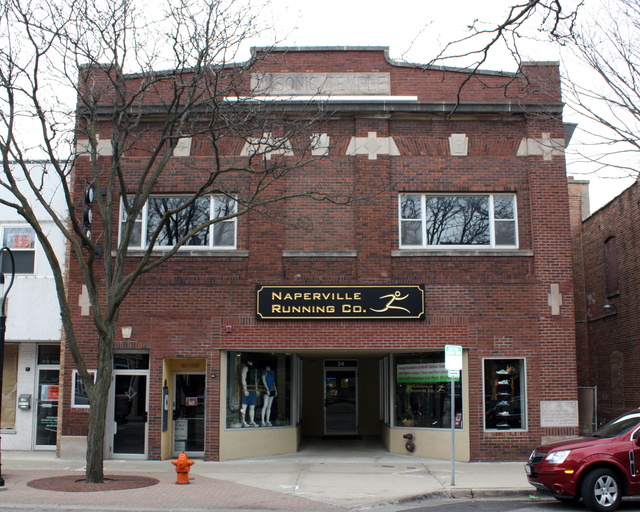 Located on Jefferson Avenue at Washington Street in downtown Naperville, the Masonic Temple opened in 1916. The Masons met on the second floor of the building, and rented out the first floor as a movie house. The theater closed in 1931, and for four years, the main floor was used for retail.

In 1935, the building became the Naper Theater, seating 480, given a marquee and showing first-run movies. In 1950, the Naper was remodeled, with a new lobby, foyer area, and sound system. Seating was also increased to 603. A couple years later, the theater’s old screen was replaced by a CinemaScope screen. The Naper operated until 1977, when competition from newer multiplexes, such as the Ogden 6, helped drive the old single-screen movie house out of business.

In 1979, the former Naper was converted to an appliance store, and today houses Mary’s Antique Mall.

Film Daily Yearbooks give a seating capacity of 480.

I know the Naper Theater was open through at least the 60s, because I saw many Saturday movies there as a kid, including Disney films, Willie Wonka, 2001: A Space Odyssey and more. Admission was 50 cents for kids. Strangely, they had a “no drinks in the auditorium” policy. There was a very small balcony next to the projection booth, supposedly the “crying room” for patrons with babies.

The Naper actually closed in the late 70’s, right around the time the Ogden 6 theaters, and the theaters around the Fox Valley Mall were just opening up.

I remember riding my bike across town (to the Ogden 6) to see Star Wars, I Wanna Hold Your Hand, and possibly even Animal House, and the Blues brothers. So, I’m assuming the Naper closed right around that time.

After the Naper closed, the building became the home of Wherli appliances, and later turned into the antique mall Bryan mentioned.

I remember seeing movies at the Naper such as The Legend Of Boggy Creek, Who Slew Auntie Roo? (which gave me the creeps well into high school), American Graffiti, The Posidon Adventure, The Bugs Bunny Road Runner Movie, Willy Wonka, The Computer Wore Tennis Shoes, The Shaggy D.A., Soylent Green (mom made us leave the theater right as Heston yelled “Soylent Green is people!!!”), Sleeper and many more.

The snack bar was small (we usually bought our treets across the street as Oswald’s (Rexall) Pharmacy, they (oddly enough) are still in business (although at a recently opened new location).

When we did buy treats at the Naper, we usually bought Necco wafers (although at this point, I can’t imagine why, as I can’t stand them now).

I don’t belive the Naper had a soda fountain, just a vending machine that dispensed soda in paper cups. My choice was always Green River.

Google should sue whoever recommended their photographers. They take photos with trees in front of the building, sometimes when a bus is going by, horrible. Here is the candle company’s site that talks about their using the old theater:
http://tinyurl.com/9p4qyn

They’re cars with camera domes on top. It would be really uneconomical to actually survey and photograph everything by foot.

Couldn’t they at least wait for the bus to go by before they press the shutter?

This link explains how it works. It’s fully automated. If they waited, they would just snarl traffic and make the situation worse. You have to pass the truck/bus at some point, and piling up cars behind you doesn’t help matters. Not to mention that the intended purpose of Street View is to give some idea of what an area looks like rather than providing researchers like us detailed photos. I’m sure technology will have advanced considerably in a few years time, anyway. I’ve heard that they are outfitting some vehicles with laser cannons now to make 3D object mapping possible – like really high-resolution sonar. That sort of thing will provide us with considerably more detail.