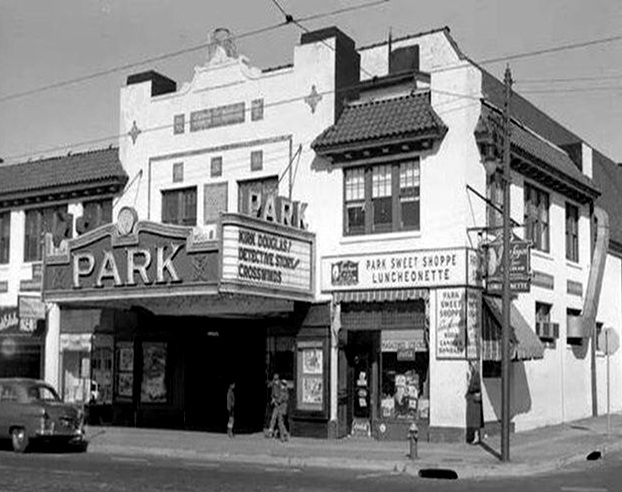 The Park Theatre was opened around 1925 when a Moller organ was installed. It was destroyed fire in 1974. A bank now stands on the site.

The Park burned down in the 70’s and was demolished. A bank currently sits on the site. About six years ago, Clearview reopened the long-closed Caldwell Theatre down the street from the Park, which was turned into a 4-screen house when it was renovated. It originally closed in the late 50’s-early 60’s and was used for retail and as a factory before reopening.

The Park along with the Colony in Livingston, was originally owned and operated by the Prudential Insurance Company. The Park lost its first suburban run status with the advent of the mall multiplexes in the seventies, and then-owner Dick Nathan tried a revival house policy and was successful for quite a few years. The unfortunate fire happened when a work crew left an exposed wire on a backstage electrical panel, putting a sad end to oneof my favorite Saturday night date places.

Does anyone remember how great the Park was in the early 70’s? It was a revival/art house playing great thematic double bills, like ‘Jules & Jim’ and ‘The 400 Blows’. It was New Jersey’s answer to the Bleecker St Cimema. They even had fun midnight shows like Reefer Madness and Betty Boop cartoons. I think they changed the shows every three-four days. Admission was only $1 – $1.50, and you could sit in the balcony and smoke. Maybe that’s how it caught fire. A great loss. I think the last movie it played was ‘The Great Gatsby’.

This article talks about reopening the theater back in 1998.
Are you sure it burned down or perhaps this article was talking about the Caldwell theater.

Plans for a perkier downtown Caldwell are stuck in limbo while competing movie developers face off over who can run a theater on the six-block strip of Bloomfield Avenue.

The former Park Theater, located in the heart of downtown, was supposed to reopen this month under new ownership with five screens and new plush seats, carpeting, and curtains after years of use as offices, a dance studio and a bowling alley.

The cinema was touted this summer by Mayor Paul Jemas as the cornerstone of downtown revitalization. The borough’s walkable stretch of Bloomfield Avenue offers daytime shopping but lacks a large magnet to draw people for food and entertainment on weekends and evenings. The legal dispute pits Jesse Sayegh of Cedar Grove against Chatham-based Clearview Cinemas and its owner, Bud Mayo. Both men built their fortunes in the movie business by focusing on small downtown theaters. Clearview now runs 45 movie theaters in New York and New Jersey, including most of the theaters in the western Essex and eastern Morris County region where Caldwell is located.

At issue are the details of a year-old, $9.5 million deal in which Clearview bought Sayegh’s theaters in Upper Montclair, Cedar Grove, Kinnelon and Middlebrook, according to court records.

Mayo’s attorney maintains that a clause in the contract prevents Sayegh from opening a movie theater within seven miles of any of the four locations. The Caldwell site at 317 Bloomfield Ave. is 2.59 miles from Cinema 23 in Cedar Grove and 3.51 miles from the Bellevue Theater in Upper Montclair.

Sayegh holds that the agreement allowed for one exception in an “undisclosed” location, which turned out to be Caldwell. He said he would not comment on the matter while it is in litigation.

The suit is heading for a spring trial. In the meantime, a state Superior Court judge ruled in October that Sayegh must halt construction plans until the dispute is settled. The injunction blocks a third party from developing the site.

If Mayo prevails, the theater could be delayed for five years unless Sayegh and Mayo reach a deal before then to allow Clearview to run the cinema. Sayegh’s offers so far have been “unreasonable,” according to Robert Lister, Clearview’s vice president.

‘'Five years? We’d be in college,“ exclaimed Jessica McDonnell, an eighth-grader from West Caldwell who learned of the legal dispute after school yesterday from a reporter.

News of the delay hit hard at Grover Cleveland Middle School, where hundreds of students from Caldwell and West Caldwell were looking forward to the freedom of walking to a local hangout. When they want to see a movie, they must ask for rides to theaters in Wayne, Parsippany, Montclair or Livingston.

‘'We’d be able to walk there, and our parents – we wouldn’t have to bug them for rides a lot,“ said Kevin MacKen, 13, of West Caldwell. "They get annoyed.”

The above article refers to the Caldwell theater.
The Park theater burned down in 1974.

Listed as open in the 1944 FDY. Listed in the 1961 FDY as part of Triangle-Liggett Theatre Sercice.