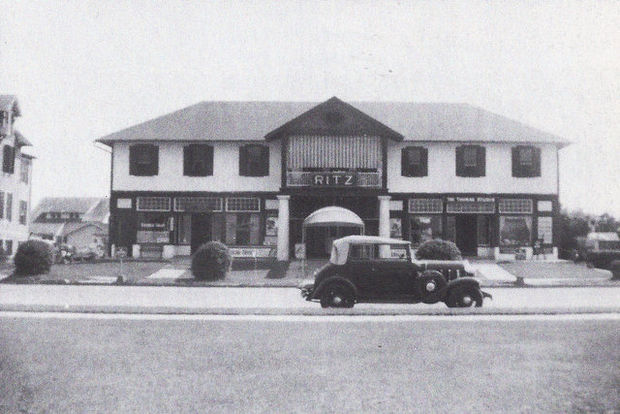 The Ritz Theater boasted a majestic facade of Greek columns and a wrap-around veranda. Operated by the Reade organization as mainly a summer operation until the mid-1970’s when it was converted into an upscale ice cream emporium.

Listed as part of The Walter Reade Organization, Inc. in the 1970 FDY & 1976 International Motion Picture Almanac. Also listed in the 1944 FDY.

was this theater once known as the Atlantic?
See attached postcard – your description of the columns and the street address give me a strong suspicion:
View link

This theatre was located on the south side of Atlantic Avenue between Ocean and First Avenues. Built in 1920 by Martin Wohlforth to replace his aidrome (not clear if the airdome was at the same location). A photo can be found on page 115 of Images in America: Spring Lake. The photo does NOT match that of my 7/28/06 post.

My family is originally from Spring Lake.
I remember going to see “The Land that Time Forgot” there three nights in a row when I was a kid…in the 70s.
I asked my father about the ice ream parlor and he said it was one even when he was a kid in the 1940s.
A good friend of my fathers purchased the building and he and his wife and six kids lived upstairs. They opened the parlor in the summer. He was a school teacher.
I think the theater is located east of this.
It has been years since i have been there. I will take pics when I go home for Christmas to see my family.

The ice cream parlor, originally Hill’s Pharmacy but now the Sundae Times, was to the right of the Ritz, at 17 Atlantic. From that pic in the Patricia Colrick book, it looks like the Ritz was torn down and replaced with the small apartment house that’s there now. There has been a pretty good bike shop there on the first floor for many years.

The Ritz in Spring Lake was one of a group of North Jersey Coast theaters known as Arcadia Theaters in the 1950s and 1960â€™s when I lived in Spring Lake. The â€œchainâ€ also included the Palace (Bradley Beach), the Rivoli and Rialto (Belmar), Algonquin (Manasquan), Arnold (Point Pleasant), Lorraine (Bay Head), Lavalette (Lavalette), and the Fly-in-Drive-In, as well as, possibly, the Colonial and Strand in Seaside Park and others that I donâ€™t recall. The Palace, Rivoli, Algonquin, and Arnold operated year round, two shows a night and weekend â€œkiddieâ€ matinees. The others were open summers only, two evening shows and â€œrainy dayâ€ matinees of the regular feature at the beachfront locations.

I donâ€™t know how they were owned, but they shared a distribution agreement, as films would circulate from one to another, with as many as three changes of bill a week. Their advertising was mostly window cards in local storefronts, and possibly an ad in the local daily Asbury Park Press. They were distinct from the Walter Reade chain, until Reade began buying some of the surviving properties in the 1970s. Only two survive: the Palace became the Beach, and the Algonquin is now an Arts Center.

The Ritz was a one-story building with no balcony. As noted in another post, it was to the left (east) of the large white building with the columns, and was demolished some time ago. (1970s?) The Google Maps Street View camera shows that the corner building is still there. If that building once housed a theater of any sort, it would have been pre-1940.

I do believe this theatre was once known as The Atlantic Theatre, owned and operated by the Wohlforth family. There is a wonderful recollection of its early days in the May 12, 1934 edition of the New Yorker. If you have a subscription, here is a direct link to the article written by son Robert Wohlforth: http://www.newyorker.com/magazine/1934/05/12/a-nickelodeon-childhood