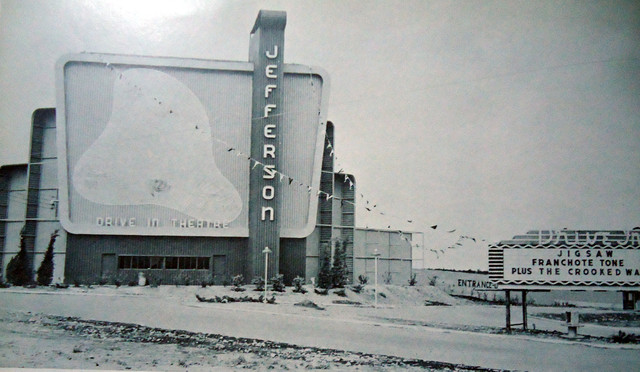 The Jefferson Drive-In was designed by Jack Corgan. The architect’s rendering appeared in Boxoffice of December 2, 1950.

When was the Jefferson demolished? I went and took some photos just beforehand but can’t remember exactly when that was…

BTW – just to respond further to TC’s old comment about a drive-in called the “Twin East”…that was the old Twin Highways, located farther out Jefferson to the east toward Grand Prairie. At one point in its checkered life span it was called simply the “Twin” – the Twin Highways is what it went by when it was a single-screener, as it was located between Jefferson and W. Davis (SH 160) and had two entrances, one off each route. Later, another complete screen/projection booth/parking lot was added, to the east and the venue became known as the “Twin West” and the “Twin East.” Very rare permutation of the twin-screen concept.

The Jefferson Drive In Theatre was demolished in August of 2004. Heres' a photo I took when they were starting to dismantle the screen.. http://www.flickr.com/photos/racphotography/479117085/ .. Today, a DISD School is on the property.. RAC Photography

The Jack Corgan architected 670-car Jefferson Drive-In opened on June 17, 1950. The theater was operated by Harold Gibbons who ran the Pike Drive-In in Fort Worth. The opening night feature was “Captain China.” The theater had a large patio with seats for walk-ins in addition to its 600 spots. Most distinctive was the neon mural on the tower featuring chorus girls, a piano player, a trumpet player and kettle drum player all set on a porcelain enamel cut out on the tower. It was said to have been the first area drive-in with in-car heaters. It also featured a 250-person seating area for walk-ups or people who didn’t want to sit in their cars.

On May 12, 1953, it had its first 3D film with “Bwana Devil.” Ray Thompson was the manager and he and two employees were tied up after a 1954 armed robbery in which the thieves took $1,398. Both thieves were caught and one received two 50-year prison sentences and the other ten years. Unfortunately, just three years later Thompson suffered a fatal fall from the Jefferson’s tower while doing routine repairs. A.E. McClain was another manager of the Jefferson until his death on November 14, 1966.

The Jefferson became part of Rowley United which became United Artists which ran it much as previous management had. But under its next operator, Texas National Theatres’ Herb Hartstien, the theater made a successful transition to exhibiting Hispanic films. Hartstein said that between the Cine Centro Three and the Jefferson, a hit film might bring in $30,000 a week. Texas National had nine theaters in Texas showing Spanish language films to lead the state in the early 1980s. The Cockrell Hill police department also profited from the Jefferson’s success. The police set up a sting outside of the Jefferson in 1979. That arrested 50 immigrants and charged them $50 for their freedom and $25 for their cars. To fight back, Jefferson manager Ramon Flores instructed patrons to make sure they had IDs or enter from the Grand Prairie side to avoid the Cockrell Hill shakedowns. That didn’t always work as the police continued that practice into the 1980s. The dollars rolled into the police department despite not having any Hispanic officers on staff which didn’t sit well with the Hispanic population which was reported to be over half of the community’s population. The theater closed in 1987 going dark until 1989.

One of the most prestigious events took place under its final operator who tried repertory film. That event happened on Bastille Day, July 14, 1989 when the USA Film Festival sponsored “A Date at the Drive-In” at the Jefferson. “The Girl Can’t Help It” was the film. That operator came back for one more season in 1990 and then the Jefferson sat empty for 14 years. It was said to have had the distinction of being Dallas County’s last standing drive-in before being torn down for a school in 2004.

Claude Ezell and Associates bought the Jefferson (and the Pike in Fort Worth) from Harold Gibbons on May 3, 1955 per a note in Motion Picture Daily.

The sign was saved and is now in front of Reds Roadhouse in Kennedale, TX (near Mansfield)