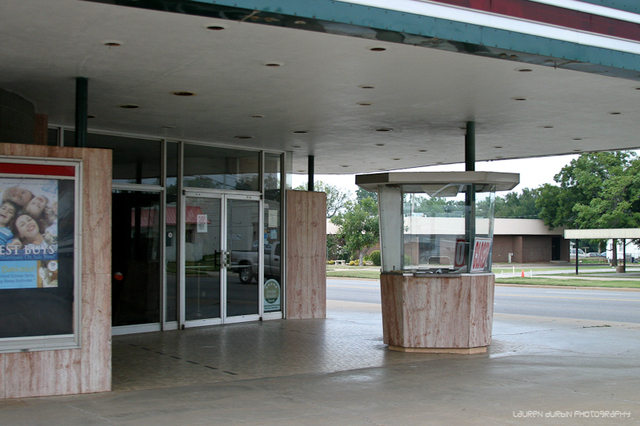 Opened in June 1948, the Leachman Theatre was considered to be the glamorous and exciting place to take a date. The interior featured Art Deco style murals in dramatic shades including gold, mauve and purple. A gold velvet curtain highlighted the screen. This theatre also featured marble flooring and wall trim as well as deco wall sconces. It was the grandest theater in this area. According to a former employee, the theatre was so advanced the movie could be started from the snack bar.

When the owner died, it fell into the hands of his daughters who turned it over to Carmike management. The Leachman family wouldn’t allow any R-rated movies which proved to be the kiss of death. In the 1970’s and early-1980’s many of the money makers were R-rated movies.

Sadly, the theater closed in the 1980’s and is now a furniture store. Much of the interior is intact and people frequently stop to take a look.

This April 2007 plan has the stated goal of turning the Leachman into a foreign film and live performance theater. They don’t say what will happen to the furniture store, or if the building is even for sale:
http://tinyurl.com/yq3qnd

Here is another photo:
http://tinyurl.com/c7wvpb

The June 12, 1948, issue of Boxoffice Magazine said that the Leachman Theatre was scheduled to open on June 17. The house had already been under construction early that year, but completion had been delayed when a fire that gutted the Aggie Theatre in January destroyed equipment intended for use in the Leachman that had been stored on the second floor of the Aggie building.

Architect Jack Corgan’s rendering of the proposed Leachman Theatre appeared in Boxoffice’s “Just Off the Boards” feature for March 29, 1947. The theater as built differs somewhat from Corgan’s original design, which included an auditorium the full width of the building that would have seated 1,300.

A later issue of Boxoffice gives the house’s seating capacity as 1,100, but given that the width of the auditorium as built appears to have been reduced by almost a third from the original proposal, that seems a bit exaggerated.

From 2010 a photo of the LeachmanTheater building in Stillwater.

I worked at the Leachman from 1969-1974. It was a grand theater. I knew Claud & his wife. She would come to the first matinee of most movies and sit in the balcony. The marque was an upright with ladders built into the building. Changing movies in winter on the north side was quite an experience. The chain was Video-Leachman Theatres and the home office was at Lee & Sheridan in Oklahoma City.

Just to update the Dec 2006 history. I worked at all the theaters in Stillwater from 1955 to 1960 while at OSU and was the doorman that night when the young man showed up with the gun. He claimed he was shorted a quarter at the Aggie and followed the receipts to the Leachman office. Another wrinkle to the story is Keith Eaton claimed that Frank “Pistol Pete” Eaton was his grandfather. By the way the kid got his quarter!

Linkrot repair: Jack Corgan’s rendering of the proposed Leachman Theatre in the March 29, 1947, issue of Boxoffice can now be seen at this link.