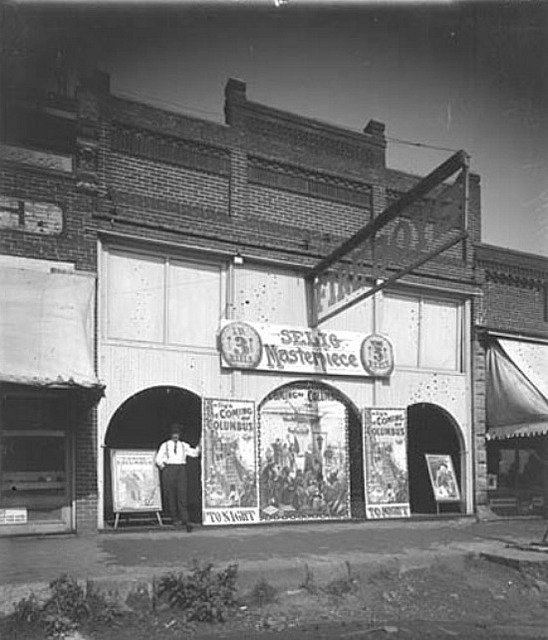 The Gem Theatre was opened in the former Herb Ricker’s Garage in 1910. It was later sold to the fire department and was renamed Fireboys Theatre which raised money for the up-keep of the fire service. The photo is dated as 1910’s.

Where’s the above mentioned photo?

Thank you, lostmemory. A fun picture to see!

This PDF has a walking tour of downtown Stillwater and mentions several of the town’s theaters. This paragraph is about the Fireboys Theatre:

“Herb Ricker’s Garage was at 915 South Main. Herb Ricker owned the first automobile in town (a 1905 Oldsmobile), and at one time used his garage to house all the automobiles in Stillwater. An ordinance prohibited gasoline storage in residential sections of town, including that which was stored in automobile tanks. Ricker would start the cars for the owners, and also gave driving lessons. Ricker later bought the Pastime Theatre which had been located at 612 South Main, and moved it to this location after 1910. He renamed it the Gem Theatre, but then sold it to the Fire Department, and it became the Fireboys Theatre which raised money for the Fire Department.”

915 S. Main is the address at which we currently list the Stillwater Nickelodeon. I’m not sure if that is an actual aka, or if there is just some reference somewhere in which the Pastime/Gem/Fireboys was referred to generically as a Stillwater nickelodeon. I’ve found no references to a house of that name except at Cinema Treasures.

The “Selig Masterpiece” The Coming of Columbus was released in 1912. Major productions such as this sometimes circulated for years after their initial release, but it’s possible that the Fireboys Theatre, as a significant house in a good sized town, got it early in its run.

Here is an updated link to the PDF of the Downtown Stillwater walking tour, which has information about the town’s theaters.