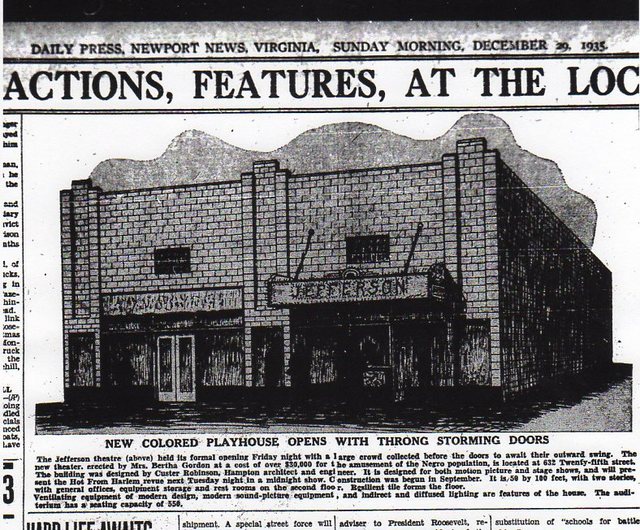 The Jefferson was a favorite of mine. You could stay all day for fifteen cents in 1963. I remember seeing the Incredible Shrinking Man
The Mole People The Longest Day Dracula Movies. My aunt Mattie lived on 26th Street. She would fry chicken on Sunday and me and my cousin Ricky would take some to the movies. It was near the corner of 25th Street and Jefferson Avenue. Close by on Jefferson Avenue were the Moton and Dumbar. Both are now closed. The Moton is sort of a community center. It warmed my heart to see the marque showing that a 72 inch TV would be showing the Super Bowl. Wellll it is something.

Does anyone have photos, inside and out or more info?

The description above is partly incorrect. I grew up going to the Jefferson in the 40’s and 50’s. It was not movies Sun thru Thur and stage shows Fri and Sat. In my day it was movies 7 days a week and occasionally the “Chitlin” circuit would come to town and you could see the stage show as well as a movie on Fri and Sat including a midnight show on Sat. Also, there would occasionally be amateur shows spotlighting local talent. That is how Newport News' own Five Keys gained initial recognition.

I have come across a ticket in perfict condition from July 5, 1939. Playing “BOY SLAVES” with Anne Shirley and Alen Baxter. Also “Flying G Men, Chapter 13. Admit one 15 cents.

Hi Stromley, what a find. Could you scan it in and post it for us to see.

Hi wsasser, I uploaded it to the photo tab.

Hey Stromley, many thanks, very nice. Helpful for my theater research.

The Jefferson was open in 1971- per newspaper ad. There is a listing for this theater in the City Directory for 1971- does not appear in 1972 City Directory. Appears that the theater closed in 1971

My brother- in -law and I were just having a discussion on where the Jefferson sat on 25th street. He said the theater sat on the left of 25th. Street coming from Jefferson ave, and, of course, I disagreed and told him it sat on the right in the middle of 25th street coming from Jefferson ave. I was glad to see the address to enlighten him. Living in Newport News were good times because the Hampton Roads boys club walked us kids to the Moton or Dixie each Saturday. The Jefferson was a little to far to keep up with that many kids. But, I didn’t live far so I used Sundays after Church to attend the Jefferson. There were show bills passed out in the downtown neighborhoods to keep us abreast of what was playing at these three theaters. I remember seeing the original Three Stooges at the Dixie theater one very hot summer day for a Pepsi cola bottle top. Memories.