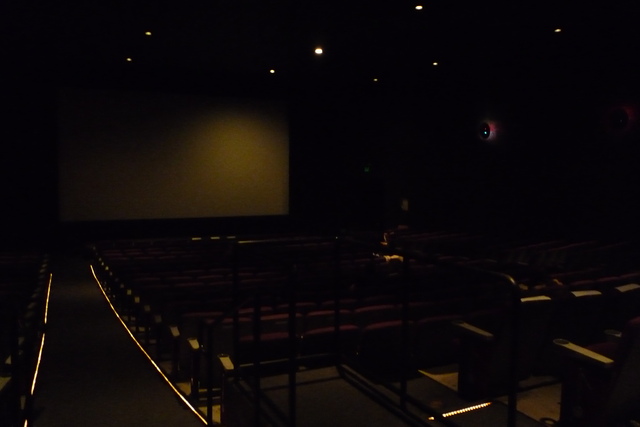 Built by the Donald Douglas Company in 1939, the Aero Theatre was originally opened January 10, 1940 as a continuous 24-hour movie theatre for aircraft workers who worked in shifts around the clock. It later became a beloved neighborhood theatre and has anchored the now posh Montana Avenue section of Santa Monica.

Robert Redford’s ill-fated Sundance Cinemas project was slated to take over the Aero Theatre, but pulled out after the bankruptcy of General Cinemas and its subsequent sale to AMC and it closed in 2003. The Aero Theatre was the boyhood cinema of the famous actor/director.

In January 2005, the Aero Theatre was reopened by the American Cinematheque after a $1 million dollar restoration including a new screen, sound and projection equipment, a new concession stand and reduced seating, from nearly 600 to 425. The screen is 38 feet wide and 18 feet high. The American Cinematheque also operates the Egyptian Theatre in Hollywood.

It was mentioned early on in the comments here that the exterior of the Aero is seen in the movie “Get Shorty.” In that film, the characters portrayed by John Travolta and Rene Russo are seen watching the end of Orson Welles' “Touch of Evil” in this theater. I don’t know if those interior shots were also filmed at the Aero, but a good deal of the auditorium decor can be seen.

Has been equipped with a 4K NEC projector with 3-D capability. Will run DCPs of the traditional classic fare all July…

Ahhh…The good old Aero where we kids used to sit scrunched down with our knees up against the seat in front, with an all day sucker watching the Saturday morning movies for 25 cents in 1952. And we have the dental fillings to prove it. Glad to see the joint is still there.

This American Cinematheque tweet has a photo from 1942, just 2 years after the Aero was built. Remarkably little has changed to the theatre’s exterior.

Robert Downey Jr. mentioned this theater on Howard Stern today. He said this is where he and Jon Favreau like to host screenings.

A friend of mine went to see 2001 in 70mm on Friday. He told me that the print didn’t look new. It looked like an older print. Anyone know anything about this?

RogerA – You’d need to ask them to be sure, but I believe it’s the same print AC started running at Egyptian-Hollywood this past fall – which means it is relatively new. Obviously, once it plays even once it’s technically no longer brand-spanking. I saw it in the fall and it was virtually flawless.

RogerA – In answer to your question, that WAS the same print that was screened last fall at “Beyond Fest”. The print itself is still stunning. What you probably heard about, was that the film grain isn’t as fine as it used to be – but that’s not the print – it’s the negative, or whatever source which the print was derived. That print was struck for AC specifically and all of us who are involved with AC stand by it.

The Aero closed following the March 12, 2020 showings due to the COVID-19 pandemic. On June 10, 2021, it officially reopened with a special advance screening of Lin-Manuel Miranda’s musical “In The Heights” on June 10, 2021.