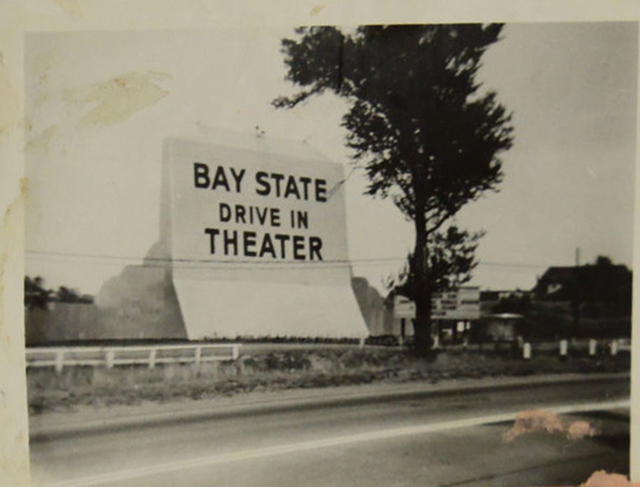 Opened in 1946, this drive-in was located on Route 6 in Seekonk, in the same general area where the Showcase Seekonk Route 6 multiplex can be found now along with other large retail outlets.

The “daring” bill I saw at the Bay State with three high school buddies in October of 1958 was “Because of Eve” and “She Shoulda' Said No!” “Because of Eve” depicted both normal and Cesarean type childbirths as well as warning about the dangers of V.D. “She Shoulda' Said No” was a cautionary film about the effects of drugs, especially marijuana, on one girl. Sensationalized ads and promotion were used to lure young people in to see these didactic films that were ultimately very dull and poorly made. I called the first one “informative” and judged the second one “horrible” in my notes made at the time.

Wasn’t there another Drive In with a title that began with a “B” that was also located in Massachusetts near the Rhode Island line? I can’t remember the name of it.

When did the Rhode Island/Massachusetts Drive Ins start to close?

Was it the late 1970s? It is amazing how many of them were in urban areas (Lonsdale, Loews, Shipyard) or what would now be congested suburbs (Cranston, Hilltop, Quonset, Seekonk Twin, Bay State).

Hardbop, you must be thinking of the Boro Drive-In in North Attleboro on Route 1.

“The Bay State Drive-In, just over the state line [Rhode Island/Massachusetts] in nearby Seekonk, recently highlighted the 12th anniversary with gift nights. Running four consecutive evenings, the anniversary featured the presentation of pearl necklaces to the first 100 feminine patrons; Elizabeth Arden perfume to the next 100 ladies; rain caps to all other females present; cigars to all men, and balloons, candy, and lollipops to the kiddies.”

[Note: this anniversary indicates that the theatre must have opened for business for the first time in 1946.]

The above address will map accurately to the location of the drive-in, which is currently occupied by Showcase Cinemas.

Here is a 1963 aerial photo of the drive-in, courtesy of HistoricAerials.com.

I was 16……..Had my new drivers license, my first true love who was a Jr. when I was a sophmore at EPHS. It just doesn’t get better than that! Bay State Drive In and Eileen Darlings were a big part of my life at that time! Gil

The Theatre Historical Society on-line archive has the MGM Theatre Report for the Bay State Drive-In; it’s Card # 604 on Page 31 of the “New England Special Collection”. But no one filled out the form, so there is no information, only an undated photo probably taken in the late-1940s.

Correction: The MGM report is Card # 604 on Page 28 of the “New England Special Collection”, THSA on-line.