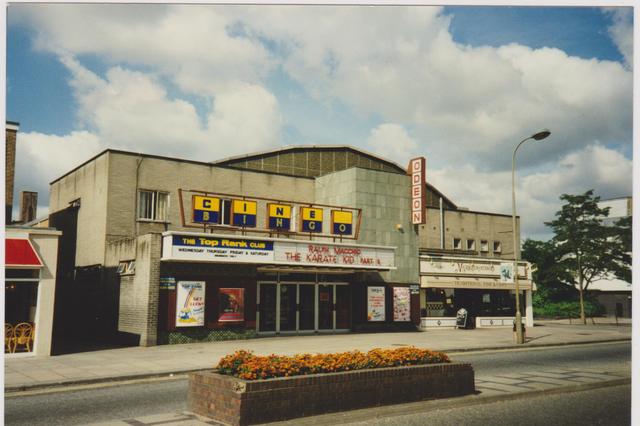 Another fine cinema which I attended frequently many years ago was the modern spacious Odeon in Hemel Hempstead.

With a foundation stone laid by Lauren Bacall, the stadium style cinema opened 29th August 1960. It was completed at a cost of 119,110 GB Pounds. Half the seats (at the front) were on a sloping floor whilst the rear section, which was separated by a barrier, were stepped. The side walls had a geometric design stepping down towards the screen. Sightlines and comfort were exceptional, the auditorium high and wide, all of which gave a feeling of spaciousness and modern luxury. The screen was vast, the proscenium opening was 63 feet wide. The screen curtains were a neutral colour with a sparkling silver diamond design running horizontally across in the lower quarter of the height.

At the side was food outlet, which later became a Wimpey burger bar.

In 1974, the Odeon switched to split weeks with Bingo on Wednesday Thursday and Friday and films the rest of the week. However towards the end of the century a new multiplex opened at Jarman’s Fields in the town and the Odeon in Marlowes closed down.

It was converted into a pub for the J.D. Wetherspoon chain named ‘The Full House’ that opened on 21st July 1998.

The Odeon was operating a split week Bingo/Cinema operation from 27th March 1974 and closed for films on 22nd August 1985 to become a full time Bingo Club operated by Jasmine.

It is now a pub in the Weatherspoon chain called ‘The Full House’ which opened on 21st July 1998.

I was 2nd projectionist at this cinema shortly after it opened in 1960. The projection room was very spacious and had it’s own toilet and washing facilities ajoining it. The projectors were Kalee 21s and I think Ross carbon arc’s. These were water cooled because so much heat was generated by the carbons. I have a photograph of the projection room showing myself about to do a change over. I can add it to the site if anyone is interested in seeing it. There were two other cinemas in Hemel Hempstead at that time, one had already closed, but the other was still open as I remember it was showing the film ‘Saturday Night And Sunday Morning’ which became one of my favourite all time films. I can’t remember the names of either of those cinemas, but I’m sure someone will recall them who lived in Hemel at that time.

The Princess (on a site in front of the present town hall) and the Luxor (on what is now Marlowes a bit further towards the Odeon from Bank Court).

And No! I don’t remember them!

There was also a much older cinema called (I think) the Aero which was somewhere up near W H Smiths at the end of Marlowes in Albion Hill. The Luxor took the Aero name from opening in 1926 until sound was installed in 1930.

The Luxor closed first (in 1960 6 months before the Odeon opened) and the Princess in 1962. Both were compulsorily purchased for the building of Hemel Hempstead New Town.

Thank you for the information Ian on the two other cinema’s which I now do recall. The Luxor I only remember seeing as it was being demolished, where as the Princess I passed every day to and from work at the Odeon. I made a visit to Hemel Hempstead in the late 90’s and called in at the Odeon. I had a chat with the manager and he allowed me to have a look in the projection room where I’d worked all those years ago as a young man. It brought back lots of happy memories of the times.

Prior to the deal for the Jarmans Field cinema, Odeon Cinemas MD Jim Whittel was planning to take the Odeon back from the bingo crowd and triple it along the lines of the very similar Odeon Harlow.