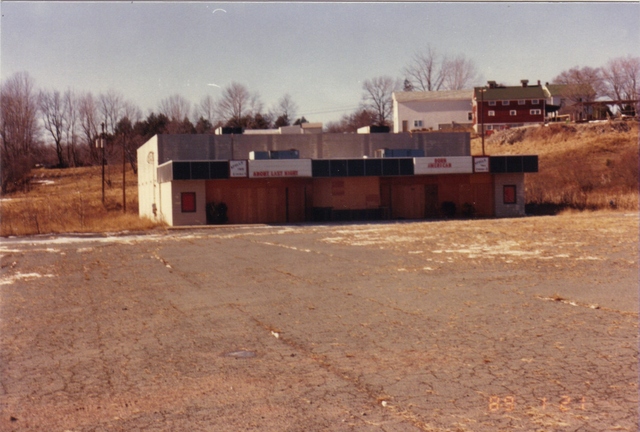 The Jerry Lewis Cinemas was opened September 15, 1971. In 1973 it was renamed Monteco Twin Cinema, and finally Apollo Mall Twin. It was closed in summer of 1986.

This theater stayed a Jerry Lewis Twin until 1973-then became Monteco Twin Cinema, named after it’s location within the Monticello East Plaza. It was unique because Twin One always had some big movie straight out of L.A. and N.Y.C. like “The Sting”, before any other theaters in New York State. They also showed Foreign Films and classics. Twin Two showed porn, but the better stuff. The theater was last called Apollo Mall Twin when the shopping center became Apollo Mall Oulets. It closed in the summer of 1986, a shame because it was one of the better theaters in Sullivan County.

This theatre sounds just like the Jerry Lewis Twin Cinema my dad worked at as a projectionist, in Carteret New Jersey. I remember our theatre ( I was 13 at the time ), was all blue in cinema 1 and all red in cinema 2. The candy stand was in the middle of the lobby, so there was no way for patrons to cross over from one theatre to the next. ( not like todays multiplexes ). The lobby had two big murals on the side walls of all old time movie stars. My dad was projectionist at the Carteret twin from the time it opened in June 1972, until the time it closed in fall of 1984. I remember our theatre running the “better” porn also, stuff like “The Cheerleaders” and “Fritz the Cat”. I have many fond memories of our twin, just like you guys in upstate New York have of yours. Our twin was the first ever in Middlesex County, Here in New Jersey. I agree with you gencin, it is a shame, because a lot of those old Jerry Lewis theatres had really decent presentations in their day.