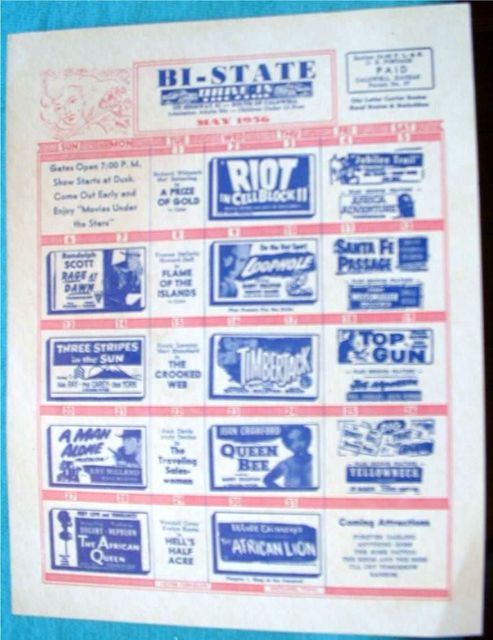 The Bi-State Drive-In opened in 1954 and was owned by Fielding and Marie Norton. It was a single screen with a 300 car capacity. It was located near the Oklahoma/Kansas border, south of Medford, OK. The theatre closed in 1989 and there is only small evidence remaining of its existance today.

I went by this theater a couple of months ago and it actually isn’t totally demolished. The ticket booth is still present as is the concession stand and some playground equipment. However, the location is extremely overgrown. I usually am not daunted by tall grass, but after one tick I took off. I took some pictures, though, and will update my website tonight.

The drive-in is less than half a mile from the state line, hence the name Bi-State Drive-in.

However, the drive-in is not in Nash, but is north of Medford. Nash is about 30 miles southwest of the drive-in.

The above address will map to the location of the nearest intersection, which places the drive-in on the west side of US-81 approximately .6 miles to the north of the intersection.

The drive-in is also clearly visible on Google Earth using 2003 or earlier imagery.

Here is what I believe is the latest view of this particular drive in from Google. http://tinyurl.com/mb3z343

This drive-in was WAY WAY out of town!

Across from the Caldwell Golf Course, literally yards from the Kansas state line.

Just the outline of the property exists today.

BTW The address above is in Jefferson NOT Medford!

jwmovies - Where do you get Jefferson from?

The Caldwell Golf Course, that you noted is across the street, is listed in Medford. The small unincorporated town of Renfrow is closer than Medford, but I’m not seeing any Jefferson.

There was a small drive-in in Oklahoma on US 81 that was just 2000 feet south of the Kansas border. Aerial photos show that it was open by 1956 and still intact as late as 1995. It sure looks like something that someone would name the Bi-State Drive-In.

The closest little (population 12 in 2010) town to the south is Renfrow OK, about five miles away. Medford OK is about 14 miles from the drive-in.

The closest city is Caldwell KS, just two miles north. The Caldwell Golf Course across the highway from the drive-in site is private, from what I could find, unaffiliated with the city.

Since the Bi-State was an Oklahoma drive-in, I’d place it under the closest town in the state. That would be Renfrow, if you think it’s big enough, or Medford.

The fact that the Caldwell Golf Course which is across the street lists Medford as part of its address on their website should be enough to say that the Bi State Drive In was also identified with Medford. https://tinyurl.com/28fyfjyf

Medford is a town of about 1,000 people. Renfrow and Jefferson are towns with 12 people each. Plus, Jefferson is located about five miles SOUTHWEST of Medford.

So, I say Medford.