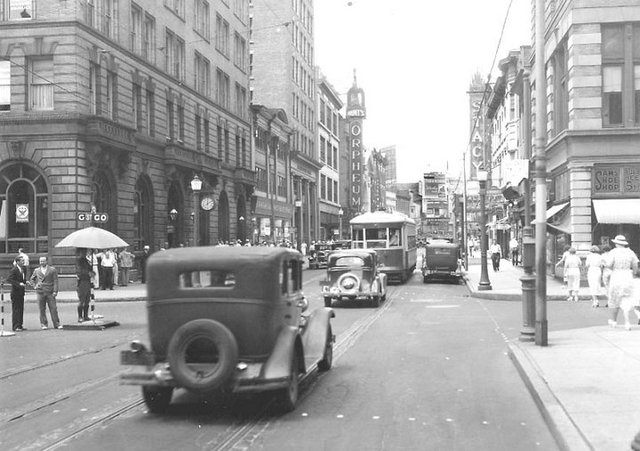 Opened as the Ten Eyck’s Orpheum Theatre on May 22, 1922 with Robert Hughes in “Come on Over”. It was equipped with a Moller pipe organ. By 1931 it was operated by Hunt’s Theaters Inc.

MikeH’s post from the Trenton Strand covers most of the Mayfair’s history:

“Associated had two downtown theatres. The "A” house was the Mayfair Theatre which was located on State Street between Broad Street and Hanover Street. It also had a large store on State Street. which was a rental property. For most of my memory it was a 5 and dime store with a lunch counter. Later it became one of the chain drug stores like Rite-Aid or something similar. The theatre was a beautiful little band-box of about 1,000 seats, huge by today’s standards but smaller than average for a first-run in the 1950’s. Dad bought it from the Mayfair Theatre Corp. of New York who originally operated the theatre as the Orpheum Theatre but changed the name to Mayfair Theatre. They were located in the Mayfair Theatre at 47th Street and 7th Avenue on Times Square which they later sold to Walter Reade and he called it the DeMille Theatre.

Last I saw it it had been cut up into about 5 little theatres. The Mayfair Theatre in Trenton was a first-run house and played all the Fox films, half of the Warner films and some of Disney. As Trenton went down hill, especially after the riots in the 1960’s when Martin Luther King was assasinated, so went the Mayfair Theatre. Downtown was no longer a destination point for the average movie-goer and all of the downtown theatres closed except the Mayfair Theatre which made a living as a black exploitation house. It was eventually bought by a Philadelphia circuit called Budco (I was working for them at the time) until we gave it back. My brother operated it for a few years and finally closed it. It sat idle for a few years until one morning the roof collapsed. Of course it was then torn down".

I worked as a projectionist at the Mayfair from 1972 until 1978, when the Henry family closed it. For the most part, Doug Hewitson worked days, and I worked nights. It survived as a “blacksploitation” theater of the 70’s. An interesting point of trivia…the projection booth was literally a concrete box that was attached to the outside of the theater before WWII. When the trolly stopped being used in Trenton, they attached the box to the outside by encasing the trolly tracks in concrete to create support beams.

When I worked at the Mayfair in the 70’s, it did not have clock motor drives for the carbon arc lamphouses. Crazy Bob accurately described the equipment in the booth, not to mention that the generator was also in there. It was incredibly loud, and I have hearing loss today partly as a result of those years at the Mayfair. By the way, Local 359 dissolved after Walt Hoffman passed away late in 1978. At that point, there were no union theaters in Mercer County left.

The 5 and dime store was originally Green’s, but became another chain. I think it closed in the 1960s. The entrance of the Mayfair was always an attraction to me as a child as it had pinkish mirrored tiles that produced many curious reflections. At one point, many were missing, but then it was renewed.

I have never forgotten my last time in this Movie Theatre before it was shut down and torn down. I was a young girl and with my sister and her husband to be. My how the Downtown area has changed. I used to love going downtown. Not anymore. It’s just not the same. We need to build it back up. Most of all the stores where I used to shop with my parents, where my mother would buy clothes are no longer there. Just about all of it is gone now. Only a few of the old stores remain.

Looking at this photo does bring back memories. I remember the Five and Dime store, Lane Bryant I think was there, McCory’s and the Stacy store. I had to be in grade school then, I was very young at that time, but I loved to go shopping with my mother and father in downtown.

The roof collapsed due to heavy snow. It took them a while even then to tear it down. Half of it was removed when demolition stopped and the entire balcony with seats and the booth above were completely exposed for some time. I did an article for the Trenton Times about it. I took the photos too.

The long corridor from State Street to the small lobby was absorbed into the adjoining pharmacy. I saw Dirty Harry and Magnum Force here (my Dad and I were too brave) in 1974. I remember phoning the theater (when we did those things) and the taped message said “Magnesium Force”. By the way, we sat downstairs under the balcony slunk in our seats.

The Mayfair was originally the Orpheum which was originally the YMCA building. The Stacy across the street suffered a fire and was demolished also. A Geno’s (KFC) opened in its spot and that is now long gone. Trenton is a lost cause.