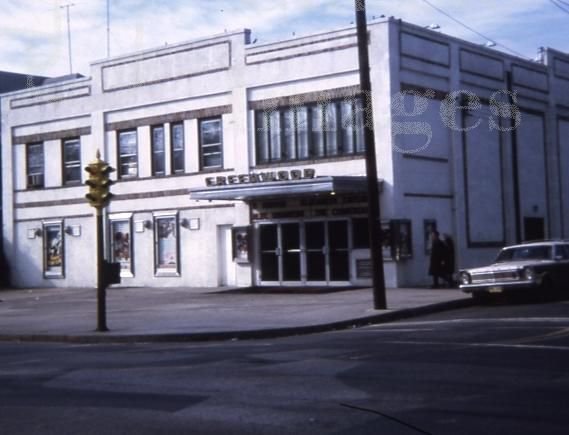 The Greenwood Theater was opened February 6, 1926. Listed as operating in the 1951 FDY, this theater closed probably in the early-1970’s and was subsequently demolished.

“Our neighborhood theatres were all typical old neighborhood theatres. … They were all about 700-900 seats and all second-run. The Greenwood Theatre was the nicest of the group. The other 50% owner was a man named Ike Levy and his son Edgar was the manager. After Ike died Edgar took over his interest in the Greenwood Theatre and did a wonderful job making it a doll-house of a theatre”.

Listed on page 1072 of the 1936 Trenton City Directory under “Theatres and Moving Picture Houses”. Address is given as 1060 Greenwood Avenue.

I remember showing “Five Easy Pieces” at the Greenwood in late November, 1971. We show Italian language films on Tuesday nights, and the joint was packed! The Main projectionist’s were Artur Fenton & John Friel. They trained me to replace Mr. Fenton who was very old. The small booth sat in front of the split balcony. It was about a 9x9' room. The equipment consisted of a pair of Super Simplex 33mm projectors, Strong Cinearc (Peerless Magnarcs – not McAuley)Simplex XL sound heads & XL magnetic penthouses. We showed “My fair Lady” and the stereo worked! They could bring back older movies in the days before vcr’s. The theatre had been tatsefully modernized in the early sixties, I believe by Henry-Levy, not “THE FRANKS”. The carpets were red,black, & yellow in small, squre geomectric shapes. The marquee was flat above the entrance doors. the a small roof with light bulbs hung over the marquee & entrance. It said Greenwood on the front, with individual bulbs. The screen was curved and the curtains worked. The lobby was narrow because the rest rooms were on either side. As you entered the auditorium, the narrow balcony steps were to the left, torwards the screen not the back wall. You would go up the steps with a wooden railing and find a small hall or walk way behind the booth. There were seats on both sides. The balcony curved out a little on each side of the booth. The was almost zero keystone angle on the 31' wide screen? That number is stuck in my head , but it might be wrong. In 1973, “THE FRANKS” leased thre Greenwood & the Circus Drive-in to some fly-by-night-guy. I worked for the guy a few times and he was showing XXX. The place was getting run down.

This opened on February 6th, 1926. Ad added in the photo section.

listed as closed but also demolished

I am sad to inform you that Edgar Levy died 6/3/12. I spent so many happy hours at theGreenwood Theater. Edgar and I were married for 49 years. He loved the movie business. We closed the theater in 1968, the same year our 2nd daughter was born.

My condolences to you, Mrs. Levy. As a child, I too spent many happy hours at the Greenwood with my movie crazy older sister Pat. I vividly remember standing in line to see “A Hard Day’s Night” in 1964 and the chorus of screams that provided an additional soundtrack! I also recall some classy roadshow-style presentations of late-60s films like “Star,” “2001: A Space Odyssey” and “Ryan’s Daughter” as well as many Saturday “kiddie” matinees.My sister tells me that prior to my birth in 1955, Mr. Levy lived on our street, Gardner Avenue, but apparently moved before I came along.

So sad when you think of what Trenton has become. All of the life and cultural vitality is gone.

My first job was a part time ticket seller in the 60s. I was in high school and worked on weekends. Lived about half a block away on Greenwood Avenue and could see the marques from my bedroom window. It was a great place.

My Dad was a apprentice projectionist and worked the Greenwood several times in 1943-44 before being drafted into the US Army.