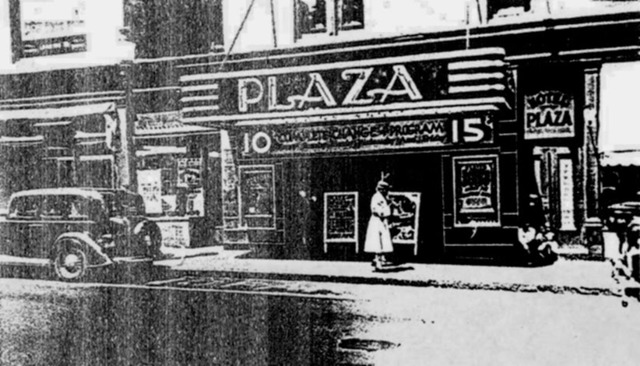 Opened prior to 1921, a listing for the Plaza Theatre appears in the 1937 Fall River city directory. It was located adjacent to the Plaza Hotel (later renamed Camelot Inn), and across the street from the Capitol Theatre.

By 1978, the Plaza Theatre had been converted into an adult movie theatre named Cinema I. The site is now occupied by a small strip mall.

Gerald – Thanks once again for your reply ! My husband could “paint you a picture” of all the Fall River Theatres from memory I am sure.
Fall River was a beautiful city in the 40’s and 50’s. It’s Main Street rivaled many in the area with an abundance of great Theatres and Department Stores along with three (can you believe it) 5 & 10 cent Stores in a row ! We both lived very close to the South Park (now Kennedy Park) and St. Anne’s Church and Shrine. Just as a little bit of trivia – from the time I was 4 yrs. old until I was about 8 or 10 I sang at a Radio Station WSAR that was located on one of the upper floors of the building where the Academy Theatre was located. The Academy Building as it is called is now Housing for the Elderly. Oddly enough when I reached the age of 40 I began working at a company located in the same historic building.

Nancie, your husband’s memories, and yours as well, should be posted where appropriate. That’s what Cinema Treasures is all about. I made sure that ALL the known Fall River theatres were represented on this site. Every recollection is valuable for those seeking to counter the slowly disappearing history of old movie theatres. Incidentally, the Capitol Theatre, for decades a bowling alley and a furniture store, is now in the process of being (slowly) restored. I hope the project comes to completion. As you must kown, it was located right across from the Plaza.

Gerald – I totally understand your last post. In the future we will post information and/or comments on the appropriate Theatre site.
Thanks for the info. on the restoration project – we hope to go back to Fall River again soon.

My husband Ed also enjoys this Fall River Theater Site. He mentioned that one correction should be made. The person who patrolled the Theater (which he and his friends attended many times in the 1940’s and 1950’s) was indeed a large burly man (approx. 275 lbs.) with red hair – however, his name was “Paul the Cop” and his name was chanted by the boys many times to annoy him (I guess) “Hey P a u l” ! and he would come running down the aisle to try to control the mayhem.
P.S. “Red the Cop” was a park patrolman at South Park for many years.

My father, Gilbert Hemenway, was a projectionist at many of the New Bedford area theaters, starting at the Allen Theater where he and his brother George were trained by their brother Floyd to be projectionists. In those days you had to study electronics and get a license to be a projectionist. Union contracts specified a 2-man â€œboothâ€, as the projection rooms were called. My father started as a ticket-taker and usher and thatâ€™s how my mother met him. The popular photo of the Allen Theater, with the bicycle front and center has one of the persons to be an uncle of mine, Richard or Joseph Casey, who died at age 21. I was born in 1943. I grew up in the â€œboothâ€. I only remember the theaters my worked from 1948ish to 1956, then we went to Los Angeles for other work because TV was killing my fatherâ€™s profession.

In Fall River it was the Plaza and the Embassyâ€¦ and there was the Newport Theater which I canâ€™t find in the RI listings; it was across the street from another theater in Newport. In New Bedford they were the Capitol, Empire, New Bedford, Orpheum, Dartmouth Drive-In, and Fairhaven Drive-In. My father worked other theaters before I was born. I think one was the Keithâ€™s in North Fairhaven.

With the advent of television and theaters going dark, toward the end my father was squeezed out of the theaters of the Union jurisdiction of New Bedford and found some work with the Fall River Local. They crossed boundries, such as the Fairhaven Drive-In being a part of Fall River Theaters. Incidentally, when the Fairhaven Drive-In opened, there wasnâ€™t a speaker in the projection booth so that the projectionist could hear the sound. My father took a ramp speaker and ran a wire up along the ceiling to the big amplifier. In 1990 I went to that booth 35+ years later and noticed his speaker. I now have it, as a momento of my father. I was amazed at the equipment that was still not vandalized. The same with the Dartmouth Drive-In and the Westport Drive-In. I took the reel of film that they play to announce intermission time.

I have stories to tell about most of these theaters. I will do such under each of their listings at this web site.

Now, the Plaza Theater in Fall River is going to be a lot of fun! When I was born, my father and Paul Joinville worked the booth. Paul became my godfather but I vaguely remember him. I remember my father working with a guy named Sturtevant, who was a member of a nudist colony. The booth was a walk-up through the open balcony. I couldnâ€™t reach the buzzer high up on the door frame to get into the booth. Behind the door was another flight up and I was nerveous about knocking on the door loud enough and disturbing the folks who were watching the movie. In the booth was a steel ladder and a hatch to access the roof. I remember the view across the water into Rhode Island. I imagine that is where Battleship Cove is today, along with the merry-go-round from Lincoln Park.

I canâ€™t remember if it was here or the Empire Theater in New Bedford where my father noticed that some guy there was frequently sleeping in the balcony. My father gave him a hotfoot. It resulted in the intended effect.

Remember the Pathe News that had the rooster crow with the fanfare at the end? For several weeks the newsreel was coming in with the rooster crowing twice. My father cut extra one off and saved them. One day he decided to splice them all together and the rooster crowed nine times!!! The audience went nuts!!! When the manager asked my father about it he said, â€œI donâ€™t know. It just came in like that.â€

During the holidays my father ran a very short film for seasonâ€™s greetings and for New Years. They were black and white but one had a red tint and the other had a green tint. The one for New Years had actor playing the parts of the manager, box office girl, ticket taker, usher, and the projectionist. They were saying things likeâ€¦ Iâ€™ll be here to sell you your ticketâ€¦ Iâ€™ll be here to take your ticketâ€¦ etc. The projectionist opens a little sliding portal and sticks his face out and says, â€œIâ€™m the projectionist and Iâ€™m just loaded with good films to show you in the coming year.â€ My father edited the film to say, â€œIâ€™m the projectionist and Iâ€™m just loadedâ€. Again, the audience went wild. Management couldnâ€™t figure out what was so funny.

My father took pride in not making mistakes in the boothâ€¦ only deliberate ones.

The Embassy Theater in Fall River was a fairly brief stint for my father. I remember seeing â€œBorn Yesterdayâ€ there. I was impressed by the size of the booth. It counted six rooms. As a small kid, I probably considered a large closet to be a room. My father came home early one night because the cops raided the theater for showing â€œEast of Edenâ€. The Fall River Archdiocese was said to be behind the police raids.

There are photos of these theaters at Spinner Publications which I will submit when we are given the opportunity.

Alan,
Those are very interesting recollections. You should post the comments on their appropriate individual pages as well, such as the above story about the Embassy, which could be added to the Embassy page. As far as photos go, use a photo server such as Photobucket.com and link to them on the appropriate Cinema Treasures pages. It is unlikely that you will soon have any opportunity to post them here directly.

The Plaza in Fall River is listed in the 1927 Film Daily Yearbook as open daily, but the seat count is not given.

The Plaza Theatre is listed in the 1921 Fall River city directory.

Does anyone remember when the Academy Theater in the 1960’s had live bands and held battle of the bands? There were 4 go go girls also. It was during the era when Annette Funicello had all those beach babe movies.

In the late 1940s the admission to the plaza theather in fall river ma was 14cents on a saturday afternoon. Your price of admission would let yoe see to main featured B movies, mostly cowboys in the afternoon for the kids. Along with the movies you got a number stub for the old mens races on the big screen. if your number corresponded with the number of the race you
won a free candy bay for that day and free admission for the next week but you had to pay the tax(about 4 cents).Then they showed 5 cartoones, a news reel, comming attractions and finally the cowboy movies. Paul (RED)the cop ran the show. He would go up and down the isles looking for what he though were trouble makers and would shine his flaslight at their seat and yell" hey you with the double bubble in your mouth get your feet of the furniture"SEATS.In response we would chant his name Paul,Paul, Paul which got him more upset, and before leaving the show we made sure we stuck a wad of gum under the seat so we thought Paul the cop would see. Saturday the Plaza was packed with kids going crazy for the good guys in the movie and booing the bad guys.Looking back at the plaza experience Paul must have had a passion for that kids hell on saturday I mean every saturday because he was there every week to keep us on our toes. They also showed movies for grown ups in the afternoon and evening and dish nite was tuesday nights. the old gentelman who sold the cand was called “pop"by the kids but I fogot the girs mane who sold the admission tickets. All in all it was a great experience my parents sent my to a affortable theather ,got us out of the house and since I lived only 10 minutes (down below the hill) away they new what time I would be home. I tell my kids that my wife and I were luckly to be brought up in the 40s, 50, and 60s.