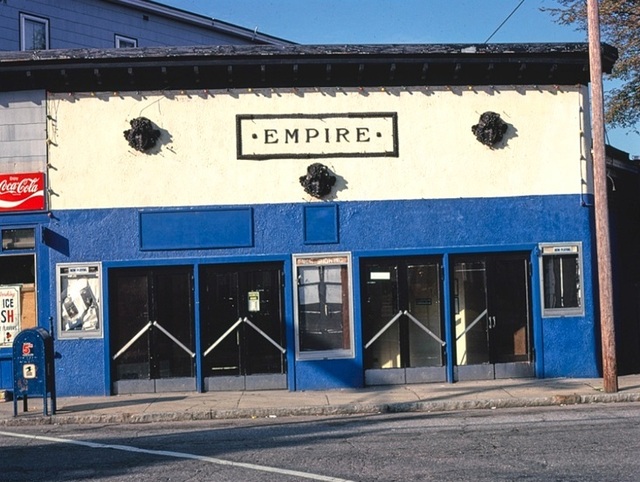 Information is scant, but as of 1990 court document found online…

“The plaintiff, Andrew Conforti, and the intervenors, Orion Theatre, Inc. and Robert A. Howe, appeal a ruling of the Superior Court (O'Neill, J.) that the Zoning Board of Adjustment (ZBA) of the City of Manchester (city) correctly concluded that the city zoning ordinance did not permit live entertainment on the property owned by the plaintiff and leased to the intervenors, and that live entertainment was not a preexisting, nonconforming use of the property, which, at the time of enactment of the ordinance, was used only as a movie theater. We affirm.

The plaintiff owns the Empire Theater in Manchester. The theater, erected as a movie house in 1912, is located in what is now a B-1 zoning district. The plaintiff leased the property to Orion Theatre, Inc., who in turn subleased it to Robert Howe. In 1990, the city granted a building permit for interior renovations of the theater, recognizing that, although the use of property as a movie theater was not allowed in a B-1 zoning district, the use of the Empire Theater to show movies was a preexisting, nonconforming use."

It was empty for many years, and has now been gutted and converted into office space and a meeting room.

It is a rather unremarkable building. Darn plain actually. If you want to find it, go down Lake Avenue until you get to the Four Seasons Family Supermarket. Take a right and its there.

Sorry I meant Howie not Bowie

Irony is I now operate a Building Maintenance firm and one of my landlords owns the theater, and it was completely gutted and changed into an office and meeting room, and can never be used for shows again because in simple terms this city hates Rock, Metal and teenagers.

Sadly yes, it has been remodeled and it’s original design/layout is lost forever. However I do have photos of the inside of it before the remodel. Also sadly the Sealtest Icecream building located next to the Empire Theater has been torn down completely. The only good thing that was worth the fight was the restoring of Dearborn Hall on Lake Ave.

I saw The White Buffalo starring Charles Bronson at the Empire Theater in Manchester NH in 1977. It was like no other movie theater I’ve ever been to. Too bad It’s in the wrong hands now.

The theater did not close because of owners, it closed because City of Manchester refused to let it operate again as a theater of any kind, though many tried to revive it over the years. The current owners had no choice but to renovate it into something different or tear it down. The City actually preferred tearing it down.

The Theatre Historical Society on-line archive has the MGM Theatre Report for the Empire in “East Manchester”; it’s Card # 484. But no one filled it out so there is no info on it, only an undated exterior photo which was probably taken about 1950.

I spent many weekend here as a local teenager. Hardcore punk and heavy metal shows. I appreciate every ounce of effort that went into this venue as an outlet for local kids. The local cops were brutal towards us. Legendary bands such as the Bad Brains and Sheer Terror played here. The only other aces we had to raw music was hitch hiking to Boston. So a big “thank you” to those who made it possible…

You missed mentioning Sick of It All, Dee Dee Ramone, Propain, and all the local bands, one (The Bruisers) of which included Alex from the Dropkick Murphy’s – all those shows were mine – Manchester just hates Teens and goes out of its way to make them not seen and not heard

The Cinema Data Project has a page for the Empire Theatre. It has numerous snippets about the theater’s history, and one long excerpt from a 1991 article from the Manchester Historical Association, which includes this information:

“The Empire Theatre, Massabesic St., Manchester NH was operated by Delbert E. Smith and Earl C. Thompson who formed a partnership October 1913, renting a building from Andrew Bruno. Smith, who worked for the telephone company, supervised the theatre operation and Thompson kept the books…The first show was 15 Dec 1913, admission 5 cents for all at all shows.”