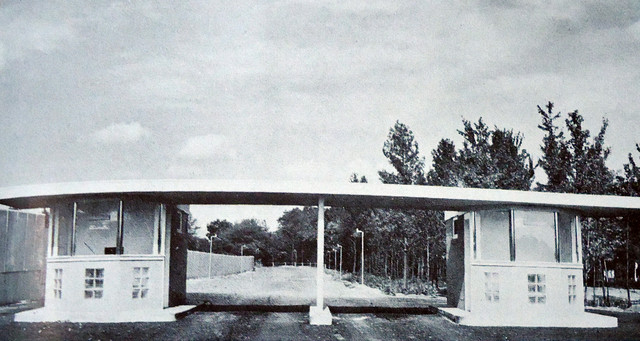 Located in Lawrence Township, two miles north of Trenton. I am not sure how many drive-in theatres were operated by Walter Reade, but this was one of them. The Lawrence Drive-In opened on August 23, 1949, with a capacity for 850 cars.

Found an article about the history of the Lawrence Volunteer Fire Association. On October 29, 1949 they fought a large blaze: “The fire scene is a half-mile south of the Lawrence drive-in theater.”

The Lawrence drive-in was located on US Rt 1 in Lawrence Twp NJ, just north of Trenton, and just north of the Brunswick Circle. It was owned by Hellman’s theaters, who also owned the Trenton Drive-In and the Morrisville (PA) Drive-In. In the 1950’s, the Lawrence had a live animal exhibit for pre-dusk viewing. The US1 Drive-In theater was the last new drive-in in the area (late 1960’s), and was located in Fairless Hills Pa on US Rt 1.

InNJ, The Morrisville D-I in Morrisville, Pa. was operated by Budco Theatres out of Doylestown, Pa. I was the dist. mgr. for this and the Ewing D-I in Ewing, N.J. in the 60’s. I have agreat color aerial picture of the Morrisville D-I. Its now a shopping ctr. rg

I posted the grand opening ad in this theatre’s photo page.

Approx. address for this drive-in was 2783 U.S. 1 Business, Lawrence Township, NJ 08648. Located behind the Mercer County Library. Part of the entrance road is still visible behind the shopping center at this address.

Does anyone have any information about this location? Besides the entrance road (small part), is there anything else remaining? Even something as small as tiles from the bathroom to a speaker pole….

There are townhouses built on this site now and all remnants of the theater are gone. There was a sign that was removed a couple of years ago near the southbound side of the road. The Bing areal maps still show the field probably from 2004 or so but that’s whats left of the bygone era.

We remember sneaking in the back fence on Allen Lane drunk as hell watching the movies free of charge and making fools out of ourselves in front of the screen pissing off the other patrons.