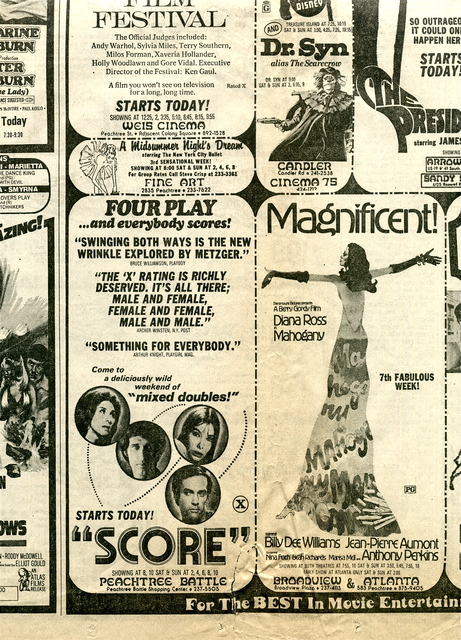 The Peachtree Battle Minicinema opened on April 5, 1968 with “Elvira Madigan”. It was located in the northern quadrant of the Peachtree Battle Shopping Centre and operated by the Modular Cinemas of America. This little theatre featured a very narrow lobby with a concession stand that also served as the ticket booth. Despite its odd configuration, it was a very hip cinema.

When Modular Cinemas of America moved out of the Atlanta market in May 1972 it was taken over by Weis Theatres. A young entrepreneur with a passion for classic cinema named George Lefont acquired the theatre and changed it’s name to the Silver Screen on October 21, 1976. The theatre ran classic films such as “Key Largo”, “Singing In The Rain”, “Citizen Kane”, etc.on a double bill to sell out crowds. The Silver Screen was later demolished to allow for more retail space in the shopping centre.

The first time I ever saw “Casablanca” was at the Silver Screen. I can still remember how striking the movie’s opening music sounded in that theatre.

In the late 70s I lived in an apartment building a few doors south of the Silver Screen. (The building
had a carpet merchant and a Chinese restaurant on the first floor, among other businesses. Steve
Smith’s dance studio, where I learned to do the “hustle,” was on the second floor.) Peaches Records
and Tapes was right across Peachtree Road. I loved to be able to walk up to the Silver Screen, there was almost always something good showing there.I fondly remember seeing the Lina Wertmuller films Swept Away and Seven Beauties at the SilverScreen. Last Tango in Paris was another. Audiences were always cool there too – laid back and serious about enjoying the movie, no yakkety-yak during the feature.

The Silver Screen was my weekend hang out from 1980 until 1983, when I was part of the Rocky Horror Picture Show “Cast”. So many wonderful memories associated with the theater. Often we could come down earlier in the evening, catch whatever was playing, go into the bathroom, change into Rocky attire and return to perform. To a generation of us, the Silver Screen was an iconic landmark and is still greatly missed. Best story? The night that Amy Carter came to see Rocky Horror, long after her dad was out of office, complete with Secret Service guards, who weer none too happy that we were throwing things. Ah, memories!

I lived in AtlNanta from 1976 to 1981, and part of the time I was just across the way from the Silver Screen, which I often frequented a couple of times per week. Memorable double features for me were Garbo in Camille and Anna Karenina, Nicholas Roeg’s Don’t Look Now and The Man Who Fell to Earth, and Jack Benny’s To Be Or Not To Be and The Horn Blows at Midnight. I remember weekend midnight showings of cult favorites such as Eraserhead, as well as The Rocky Horror Picture Show. Their concession stand was ahead of its time, too. You could buy things like coffee, muffins, dried fruit, and hot apple cider during colder months. Fondly remembered and sadly missed.

This was my first introduction to “real” cinema when I was maybe 10? 12? Memorable movies were the original Body Snatchers, a week of Hitchcock…that was amazing! They would do these theme weeks where you never knew what you might see…I saw Rocky Horror here as a little kid. Must’ve been 79? Glad there were no age restrictions! I loved that they would do a double feature. Who does that today? What ever happened to George Lefont?

This and the Ansley Mall minicinema opened on April 5th, 1968. Grand opening ad in the photo section. 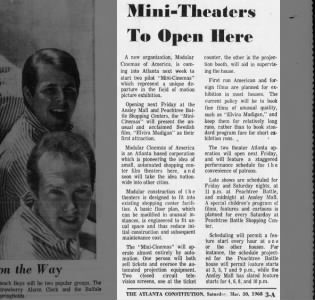 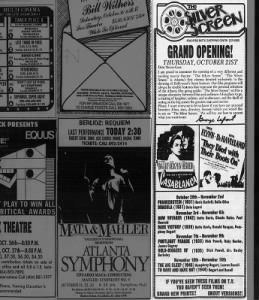 Thanks for posting that article on the opening of the Mini Cinema chain. Mr. Gentry, and Mr. Maddox were real visionaries for the future of the way theaters would be built in the era from 1968-1984 or so. They were at least two years ahead of the Jerry Lewis chain and given the right picture all of the Mini Cinemas did good business at times, even after they were sold to Lefont, Weis, George Ellis, and even AMC.

As Barbara Gentry wrote on another page, they got off to a rough start as the big opening night celebration was short circuited by the assassination of Martin Luther King, which took place the day before.

As for the article, I do not know if the closed circuit camera system was ever installed. If it was it was gone by the time I first worked here in 1971.

A picture of the site as it appears today is in the photo section. The current three story building there extends into what was the driveway running alongside the theater. The spot where the sidewalk that runs under the overhang starts was the location of the boxoffice which was in the front corner of the stand alone, single story building. The topography of the site and the way the building was cut into the embankment led to one of the more humorous episodes I witnessed during my forty or so years of working in this business.

In July 1974, halfway through its Weis days, PB was playing Sugarland Express. This early Spielberg effort had opened in April, exclusive run here as was the practice in those days. Weis was the most aggressive of the local companies in bidding big advances which meant three and four month runs of even average pictures like this one were not uncommon. So, during the prime summer season PB was playing this worn out movie to a weekday matinee crowd of about 10 patrons with no hint of the excitement to come.

The building was only one story, and if you walked around it you actually had to duck to walk under the soffit of the side opposite the parking lot. In the six years since its construction, a section of the soffit had come loose and started to sag. A group of neighborhood boys with time on their hands, found this spot and after a little exploring realized that the attic over the auditorium made a great place in which to spend their summer vacation. They placed planks over some of the ceiling beams, brought in some sleeping bags, candles, and snacks, and turned the attic into a playhouse. If they got bored they could just lift a ceiling tile and watch the movie.

The drawback to this scheme was the same as in your own attic. The drop ceiling would not hold any more weight than your Sheetrock one at home, and if you stepped off the beam you would find yourself on the floor, one story down. That is exactly what happened here on that sleepy July afternoon. Imagine the surprise of those few patrons present when a hunk of ceiling tile fell onto the small stage in front of the screen followed by a lit candle, a bag of snacks, and a young boy. Everyone sat there stunned for a moment before the boy got to his feet, limped across the stage, and out the exit door to the parking lot. This was followed by a lot of muffled shouting and rustling noises from above the ceiling as the rest of the gang made their way out the soffit exit and were gone.

Unfortunately I was not there when the customers came out to tell the employees what had happened but it was quite the scene I was told. I mean, how often does the concession attendant have to deal with a complaint of children falling through the ceiling? It was all pretty funny in retrospect although it would have been much more serious if the boy had fallen into the seating area, especially an occupied seat. When I arrived for my shift, the fire department was still there checking the attic for fire and clearing out all of the clubhouse debris.

The culprits were never found, we cleaned the mess off the stage, and were back on the screen that night. I have always wondered if any of those boys returned to the theater as young men during the Lefont years, possibly as members of the Rocky Horror Show cast, and told their companions about the day they fell through the roof.