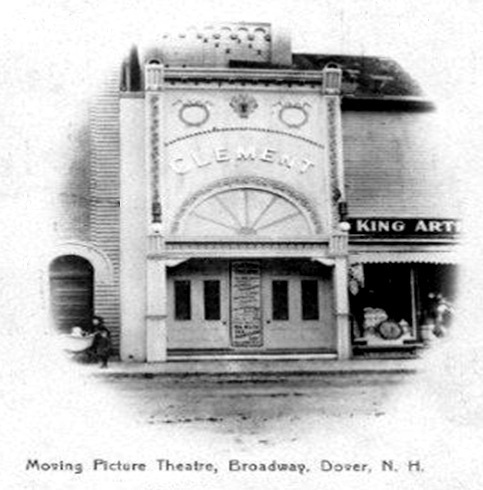 Another photo that I came across is the Clement Theater in Dover, N.H. (Click the link below for photo)

Any further information on the Clement Theater would be appreciated.

There are recollections from locals on one site that recall the Clement as the Uptown, also as the Broadway. I was going to add the Uptown/Broadway as a new theater, but perhaps it should simply be an aka. Lloyd Bridgham Theaters was the operator of the Uptown in the early sixties.

I should have mentioned that the Uptown’s address was 4 Broadway, Dover NH.

The MGM Theatre reports of May 1941 list 3 movie theaters in Dover NH, the Strand, the State and the Broadway. So “Broadway” must have been the name in 1941.

Lost- that photo shows a really old theater, perhaps from the 19th century. In the 1897-98 edition of the Julius Cahn Official Theatrical Guide, there is a Clement Opera House in Berlin NH run by one F. Clement. Possibly, Mr. Clement opened a theater with his name on it in Dover, later. In the same Guide there is a City Opera House in Dover, but Mr. Clement was not associated with it.

I can’t find the Clement mentioned in Boxoffice or any of its predecessors. The place must have closed.

If somebody wants to add the Broadway Theatre in Dover, the April 6, 1946, issue of Boxoffice said it had burned down on November 4, 1945, and was being rebuilt. However, when the new theater on the Broadway’s site opened it was named the Uptown. Lloyd Bridgham was the owner of both houses.