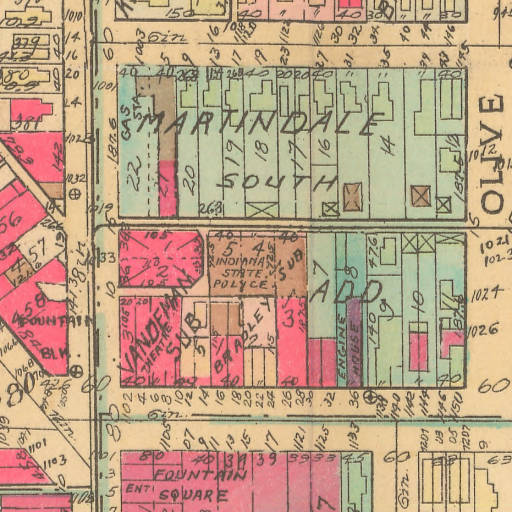 To answer lostmemory’s question, yes this is the Fountain Square neighborhood of Indianapolis. Too bad there aren’t any interior photos of this theater, that have been uploaded.

The photo we are currently displaying depicts the Fountain Square Theatre at 1105 Prospect Street. The Sanders Theatre must have been across the street. On its site (1106-1110 Prospect) there is an old-looking brick commercial building that has “2001 A.D.” carved in its parapet, so the theater might have been demolished, unless the date denotes an extensive renovation of the building.

David you’re right. I hadn’t noticed the back of that building, which does look like an old stage house. Its modern address is 1116 Prospect, though. If that’s the Sanders Theatre building, the lots on the block must have been renumbered since the old directories were published.

Sorry, only two theaters transfered on the Baist Map, Fountain Square, bottom center and Sanders, center left. The 1116 building shows where the current stage house is for the White Rabbit Cabaret (burlesque) stage is 30' X 20' link . I want to go see the backs of these buildings. Short raod trip.

I have 2 books of new theatre passes for the Sanders, Granada or Fountain square theatre. Dated 194_. I wish I could post a picture.