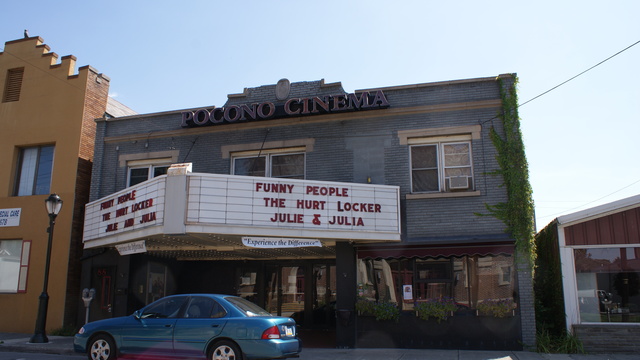 Originally opened as the Academy of Music on July 8, 1884. It began screening movies as the turn of the century. It was renamed Grand Theatre by 1908, with a seating capacity of 800. By 1929 the seating capacity was listed as 660. The Grand Theatre was restored and opened sometime in the late-1990’s as the Pocono Cinema. It reopened as a single screen art house with a coffee house and art gallery in the lobby. Their success enabled them to add two smaller theatres in the back. The cinema shows art house fare as well as mainstream movies that do not play at the nearby Stroud Mall.

It closed briefly in November 2007, re-opening as the Grand Cinema. In early 2008, it was renamed Pocono Cinema again, but this was short lived as it closed at the beginning of May 2008.

New owners have since taken over and it has reopened.

The new owner had to give it up after only a year of ownership, and The Grand closed Nov. 9, 2007.

John Yetter, the man who ran the theater as Pocono Cinema for 10 years before selling the business in 2006, and the man who continues to own the building â€" reopened it on Nov. 21, 2007. He is actively trying to sell the property, but has pledged to keep the movie theater open until he does. He would like to see a non-profit organization take over the theater’s operations.

After being closed for nearly six months, the Pocono Cinema is reopening this week as a non-profit community theater.

Going non-profit allowed the cinema to fundraise $30,000 for renovations and to utilize volunteers.

The community will be paid back by bringing people downtown to patronize shops and restaurants.

The previous operator ran out of money after only a year. The building’s owner and former operator ran it for a couple of months before closing it down last April.

Read more at WNEP Newswatch 16 and at the Pocono Record.

THIS FINE CINEMA IS OPEN AND IT STATUS SHOULD BE CHANGED TO REFLECT THIS!

This theater is indeed open; there is a picture accompanying this article about theaters in the area: View link

An 800-seat house called the Grand Theatre was operating in East Stroudsburg in 1908, when it was included in the list of American theaters published in the September 5 issue of The Billboard. The Pocono Cinema’s building could date from the 1900s, though the front looks a bit plain for the era. The Grand Theatre of 1908 might have been this theater or a predecessor of the same name.

Please read A History of the Movie Theaters in Monroe County to get accurate information on the Pocono Cinema’s history. What is today Pocono Cinema began its existence as The Academy of Music on Tuesday, July 8, 1884. Theater that showed 1st movies in area. The book above is available for sale at the Pocono Community Theater, Carroll & Carroll Booksellers, Monroe County Historical Association and the Quiet Man Bookstore.

@fordraff – enjoyed your review of John Ireland / the scarf for IMDB. Right on.

With the Poconos movieplex gone, this is the only theater in town.

But Cinemark Stroud Mall It’s very close, there are still options to go see a movie