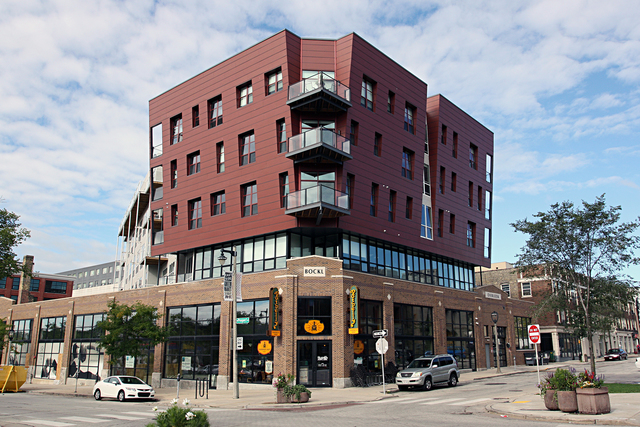 Prospect Mall Cinemas was a three screen theater which opened in July 1976, and was operated by Marcus Theatres. This theater had all digital sound and shows first run movies.

These small cinemas are part of a shopping mall carved out of a 1920s automobile dealership’s indoor showrooms and garage. The massive concrete colums remain to support the two floors and lower level. It has never been a very thriving place with about 15 stores (often vacant) in addition to the cinemas which were intended as competition to the ORIENTAL movie palace a block away. There is no decor to speak of, and the lobby/concession stand is miniscule. It has never had a parking area, so relies on street parking and the walking distance of the area densley populated by students at the nearby U. of Wis. at Milw.

I used to work as projectionist and assistant manager at the Prospect Mall Cinema. I have to take the other commentator to task for some of their assertions. First off, it does have a parking lot and always has. It is merely accross Prospect Ave. from the mall. Secondly, I think that it is inaccurate to say that it was intended as competition to the Oriental since we run quite different films. they have more foreign/independent fare wereas the Prospect Mall ran mostly Hollywood films. We never, ever screened the same film at the same time as each other.

I do have to agree that the decor is pretty much non-existant. But what you do get at Prospect Mall that most theaters don’t have is cheap tickets (at last check it was $6.50 for regular admission), fairly empty theaters so you can sit where you like, and fresh popcorn.

It is also worth noting that anything showing in screen three will not have DTS since that is the only one not wired for it, but that the image is usually better because there is a shorter throw.

Early word has reached me that the cinemas will soon be gutted from the building when the lease runs out at the end of June.

The Prospect Mall has been eyeing its impending doom ever since being bought out by the same folks who are redevloping Bayshore Mall
(I don’t recall who they are just now). They have held off demolishing the theater because they wanted to see what developed with the Kennilworth project and St. Mary’s expansion first. There had been rumors that the lease would be bought off of Marcus for a few years. My understanding is that they have not decided whether to demolish the building or just gut it and rebuild the exterior.

This theatre is now closed, and frankly, I doubt if anyone cares. This was probably one the worst cinemas that Marcus ever built! It was just a “god-awful” place to see a film, it was always over-shadowed by it’s neighbor, The Oriental, just a few steps away. The Oriental is a prime example of how to mulitplex an old theatre without completly destroying the character of the theatre! I can’t think of any reason to mourn the passing of the Prospect Mall Cinemas.

“This theatre is now closed” and the status should be changed to Closed. Prospect Mall is also closed.

July 2nd, 1976 grand opening ad can be found on this microfilm at
View link
remember to rewind it after you are done (just joking)

Come on .“the worst cinemas ever built”.