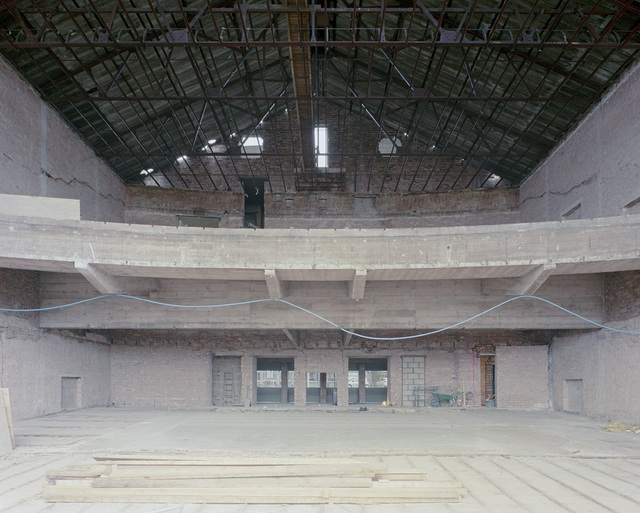 A mid-sized suburban cinema in an area of the West Midlands, near Walsall, the Avion Super Cinema looked remarkably like an original ‘Odeon’ but was never owned by that circuit.

Finished in cream glazed faience enlivened with green bands and a black base, there is a huge window lighting the circle foyer with entrance doors underneath the central canopy.

The auditorium is a dull brick box behind the façade. Neon lighting was much in evidence at night.

There was also a small stage and several dressing rooms. Seating was divided between the stalls and single balcony. The auditorium was decorated in shades of rose-dubarry and silver with the Art Deco style plasterwork picked out in green.

Several different colours of seating was used to create diametrical patterns when viewed from the stage.

The cinema opened on 26th September 1938 with a personal appearance by George Formby followed by his latest film “I See Ice”. It then settled into an uneventful routine mainly showing films but with around six full weeks of variety shows on the stage.

No major changes were made to the design of the building and it eventually closed on December 30, 1967.

It became a bingo hall almost immediately after and continued for over 40 years.

In 2001, the faience tiles were in poor condition and were removed with the walls underneath being rendered and painted - this has considerably smartened up the façade and indicates that the Avion Cinema building was scheduled to be around for some years to come. Unfortunately, due to increased Government taxes on bingo, the Gala Bingo Club was closed on 1st August 2009, and the building was put up for sale. It was taken over by the J.D. Wetherspoon chain of pubs. The interior has been gutted and the stage house has been demolished to provide an open-air drinking & smoking area.

Unusual Is that Roland Satchwell was an active Director until 1945, when a New company was formed to take over the Avion and buy the Dale Willenhall from the Estate of Norah Tiler.. A reminder Satchwell designed the Alexandra Theatre Birmingham… which not being a Cinema is not listed here

Two recent photos on The28dayslater site show the rear of this cinema being demolished. Believed to be for conversion to a Weatherspoons pub.

Weatherspoons usually knocks the back wall out. alas.. But as long as they do not demolish the rest of the building. There is some chance in the future to turn it into a Live theatre.. As The Walsall area lacks anywhere decent to perform in..

Latest rumour from a Brownhills blog site is that the AVIONs facade area (all thats left) has now reopened as a Wetherspoons and the auditorium site has become the aforementioned car park. I`m going there with my camera soon and will post the results. I used to be ODEON_NUT by the way but forgot me details lol

The Stage house seems to have been demolished. The very fine Ronald Satchwell Art Deco interior was totaly destoryed. I live not far from this theatre..

I have just uploaded some photos from the interweb showing the work on the building, it’s a shame about the interior.

J D Wetherspoon did, indeed, take over the building, opening it on 9 July 2013 as The Avion. Nothing, of course, remains of the cinema interior, but there are many photographs and other mementos from its days as a picture house on display, and the exterior has, perhaps, never looked better!

For me. I believe the interior is the most important part of the building The extorior is ok for those that never went inside any cinema..

The Blue Plaque details wrong Roland Satchwell designed 80 Cinemas and 2 live theatres and was also a Director of around 30 Cinemas The comment in the first Paragraph commenting on the Odeon Style of this building.. Is Very simple Roland Satchwell and Cecil Clavering created the Odeon Look at the Odeon Kingstanding and Warley These Cinema although Branded as Odeon where in fact controlled by the Clifton Circuit (Share wise) until 1947-48 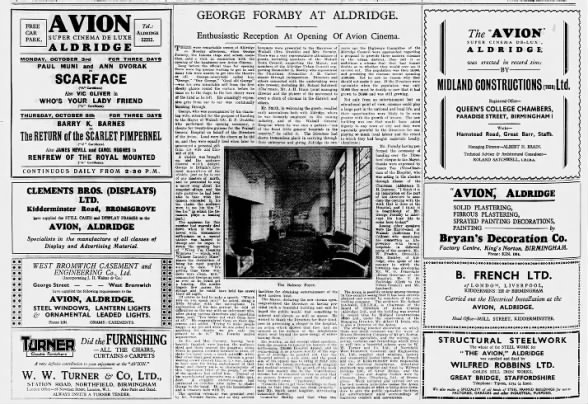