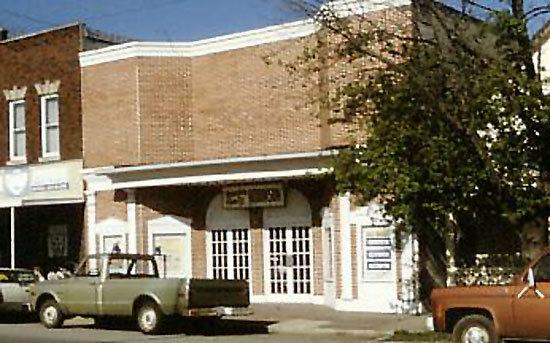 I went to the official web site and saw the following:

The Kent Theatre is for sale!

It’s a shame that even a 225 seat theatre is having hard times making it.

Could be that there is a multiplex not to far from it and they are having a hard time making it with only showing one current run a week. It says on the web site they are trying to get a synching platter system so that they can run more then one move a week. I guess they can have 2 movies and alternate the show times. I would love to see a little place like this.

This theatre gas indeed sold in April, 2009. Sold quickly in fact. No problem with booking movies, no lack of interest or customers. Owner had to relocate primary business and residence. Distance became a challenge which could not be resolved. Great little theatre.

That’s really too bad, pentagroup. It’s heartbreaking to hear of yet another cherished theatre closing down.

The previous owner was raised originally in South Whitley and after college found himself in CA. He visited his hometown, saw that the theatre was for sale in ‘05, and bought it on a whim, hoping that he could relocate. However, due to the economy he was not able to. He put the theatre up for sale and it sold briskly. The theatre is still open and operating as a movie theatre on most days, and a church on sunday mornings. The new owners are D. Mark and Michelle Pratt. Still the best deal on movies around that area.

Don and Vi LeBrun, the original owners, were the most wonderful people you could meet.Don usually hand painted his own posters to save money!

This theater was lost due to fire February 2012.

The Kent Theatre was probably the project noted in this item in the January 3, 1941, issue of The Film Daily:

“South Whitley, Ind.— Don LeBrun will build a new 400-seat theater here. Erwin Fredricks, Chicago, is the architect, and building will begin as soon as the necessary steel is available.”This video of a news report about the Kent Theatre was uploaded to YouTube on February 20, 2012, two days after the house was destroyed by a fire. One woman interviewed said she had started working at the Kent the day it opened, which she said was July 3, 1947. I don’t know if her memory failed her or if the project actually did have to wait until after wartime building restrictions were relaxed before it could be completed. The report also said that the house had been closed for about two years by the time it burned, and had been in use for church services.

Snipes Can Be Found On YouTube From The Kent Theatre In The 50s.