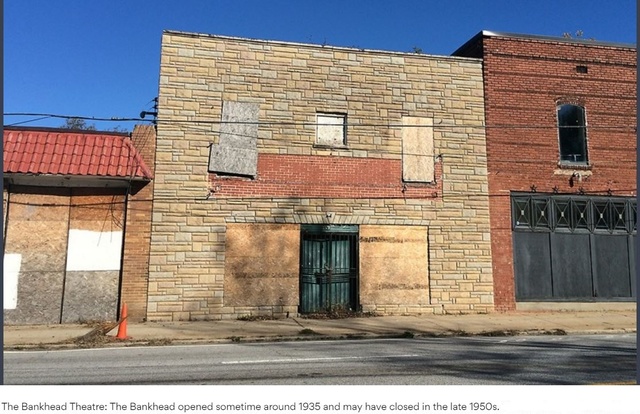 I happened upon this theatre about a decade ago. At the time it was being used as a training facility for boxing. I initially thought this theatre might haven been the old Grove Theatre. A resident of the area stated that this theatre went by the Bankhead name and ceased operating as a cinema sometime during the late-1950’s or early-1960’s.

Located film listing for the Bankhead in the 1935 through 1940 editions of the Atlanta Constitution, but no street address. A film titled â€œEspionage Agentâ€ was playing there on July 8, 1935.

Yes, the Temple Theatre struck me as being an old structure, as well. These long gone movie theatres, as well as the ones that have survived, give a pretty good idea of the growth patterns of Atlanta. You could probably draw strong parallel between developments in Atlanta and many other parts of the country.

If my dad had not been a movie buff and taken me to the movies in Atlanta beginning in the 1950’s, I never would have known about some of these theaters – or the way people lived in those years, for that matter. This is more than an idle interest in old movie theaters, it’s an interesting aspect of sociology.

The only thing that would have mitigated against the use of a site in College Park as a recording studio in the ‘60’s and '70’s was the noise from the (previous) Atlanta Airport (located on Virginia Avenue in those days). Soundproofing a recording studio in that area would have been tough. That doesn’t mean it didn’t happen, though. Nevertheless, the airport noise only got worse over the years.

Here is a link to a archive photo of the Bankhead.

The Bankhead Theatre was not actually on Bankhead Highway but on Marietta Street at the intersection of Bankhead and Marietta. This is now the site of Georgia Tech’s Ivan Allen Schoold of Business. Across the street is the renovated Roxy Hotel with it’s WSB -Welcome South Brother – sign still visible on the south side of the building.

This is the old Bellwood community a tough working class neighborhood bordered by the Exposition Cotton Mill community to the west and the public Techwood Homes project to the east. Just north of the Bankhead were the stockyards where farmers brought in their livestock. Next to the Bankhead was Sunshines Department store and one of the first Big Apple grocery stores.

Thanks, rcw, for the lucid clarification! You seem to be a native Atlantan, like myself. Even though I haven’t lived there for many years I really appreciate the lore of the city.

Do you know the years that the Bankhead operated as a movie house?

Yes Don, I’m a native Atlantan. I’m glad that I could clarify the confusion about the Bankhead but I don’t know the years it was in operation. I do not recall it being an active movie house in my life time. Therefore, it had to have ceased being a movie house at least before the early 50s.

Bellwod was a tough neighborhood that we passed through on our way to downtown from Grove Park. I remember the building and the old theatre marquee. In the 50s and 60s it was a general merchandise store. In the late 70s and early 80s the area was abandonded and eventually acquired by Ga. Tech.

Take a look at the link that Jack Coursey posted for a photo of the exterior of the Bankhead Theatre (Thanks, Jack!). The host site lists the photo as being from about 1936. However, it appears to be from a much earlier era. There is a poster for the serial PERILS OF PAULINE (circa 1914) on display. Also, the little girl standing outside is wearing a dress that looks like it is from the period around the First World War. So, the Bankhead may have been in operation as an early silent theater.

Grove Park and Bellwood were off the beaten path for me, since I grew up in East Lake and Decatur. Like many cities, the different sections of Atlanta had distinctly different personalities in those days.

I’m researching a property for a client and it includes 819 Bankhead Avenue, now Donald Lee Hollowell Parkway. This property is currently vacant and is expected to be renovated for office use. It is listed in the Atlanta R.L. Polk City Directories as the “Bankhead Theatre Motion Pictures” and is listed as such from 1934 through 1944. Earlier directories were not reviewed. This building has been used as an appliance store, Redfern Sausage Warehouse, Dixie Elevators, and as a church. It is a masonry structure with two floors and the rear of the building is open from the bottom floor to the roof. The floors are hardwood and the other interior finishes appear to be newer than the structure of the building, probably 1970ish. Steel beams were apparent but were probably added by the elevator company.

According to the 1940 Atlanta City Directory the theatre was located at 819 Donald L Hollowell Parkway NW (formally the Bankhead Highway).

i work at the 1576 bankhead old theater and would like to have more history on this building.it is a two story building and has the original stairway.