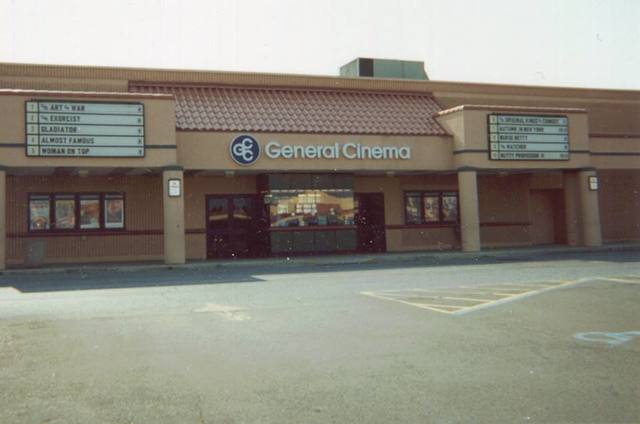 Opened on December 25, 1975, this theater began as a three screen and was located literally across Route 1 from the Quaker Bridge Cinema. Four more screens were added in the mid-1990’s. After the Hamilton 24 opened nearby, the theater briefly expanded to eleven screens but shut down around 2000. The theater has been converted to retail space.

Dave, I was there about the same time you were (spring 1976). I was there to see ‘Peter Pan,’ but I distinctly remember ‘The Bad News Bears’ was playing simultaneously, because while waiting in line, I heard a father say to his son, “We’re not going to see ‘The Bad News Bears,’ we’re going to see ‘Peter Pan’.” (Wish I had seen BNB on the big screen. I had to settle for the bowdlerized TV version until home video came along.)

On an unrelated note, anyone remember the old Game Barn arcade? It was right in the corner of the mall where TJ Maxx presently is. It opened in late ‘75, but I don’t think it survived the decade.

Mercer Mall Cinemas did indeed open Xmas 1975. I was the first head projectionist (from 1975-1979). The theater was very successful, with months-long (!) runs of “Saturday Night Fever” and “Animal House.” I had to get a replacement print for “Fever” due to extreme sprocket hole wear!

Not for nothing tombumbera, but I ran prints of Jurrasic Park at the old Amboys Multiplex for 9 months back when it first came out and we never had to replace the prints once. Of course we had a full union crew of projectionists, as opposed to the non-union crew that was at Mercer Mall.

One, or perhaps both, of the expansions of the Mercer Mall Cinemas was designed for General Cinema Theatres by Port Washington, New York, architect James Thomas Martino.

I remember seeing JAWS there

markp, I don’t know what union-vs.-non-union booth has to do with print wear. The alignment and tension on the take-up reel would be factors in sprocket hole damage. We had issues with this since the theater opened thanks to initial poor setup by a lousy RCA service man. I eventually learned how to address most of the problems in the booth myself. And perhaps I am misremembering after all these years but it seems to me that Universal’s prints (i.e. Jurassic) were made on a better film stock than Paramount’s (Saturday Night Fever). I never had to replace a Universal print. We were also running SNF five shows a day with midnight shows on the weekends. We ran SNF close to 1000 times during its run.

General Cinema Corporation went under largely due to overbuilding. They got into a fierce screen-building competition with AMC, and AMC won. Among many factors in its decline was GCC’s corporate policy of building free-standing theaters (with higher overhead expenses)wherever possible as opposed to AMC’s policy of building in high-traffic shopping malls. Of course today AMC’s theaters are bigger than some shopping malls. Booking was also a problem – GCC’s head buyer passed on movies like “E.T.” while we played dogs like “Author, Author” with high guarantees. This meant that we played many films to near-empty theaters for way too long as we tried to recoup as much of the guarantee as possible. It is no coincidence that that booker left GCC to work for Fox distribution! Today Mercer Mall is booming and if GCC had stayed afloat they’d probably be doing quite nicely there.

Nice theater. I took my son to see a couple of Disney movies there. We also saw the ‘updated’ version of Star Wars, A New Hope.