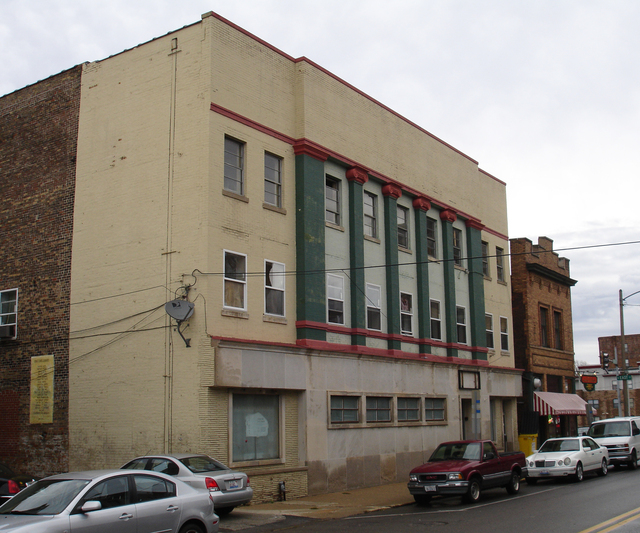 Opened on April 7, 1910 as the Chatterton Theatre, replacing the Grand Opera House (1891-1909) which had been destroyed by fire. On October 5, 1923 it was renamed Illini Theatre. It was closed in 1933. The Illini Theatre is listed in the 1945 Film Daily Yearbook as ‘Closed’ with seating for 1,156. It had been operated by a subsidiary of Paramount Pictures.

The former theatre became part of the MARC Center, an organization which assists developmentally disabled individuals. By 2011, it was operating as a comedy club, which closed in July 2014. It is now a church.

The Illini is indeed next door to Lucca’s Grill. I vacation in Bloomington every year (I’m still a member of the Bloomington/Peoria Stagehand’s Local), and Lucca’s is a must place to visit. Karl Blakeny, who along with his brother was an official of the Local and grew up in Bloomington has taken me on several tours of theatre sites and introduced me to Lucca’s. From their parking lot you face the back of the Illini and it’s easily identifiable as a stage house. The only trace of the theatre from the front is the pillars above the second floor, now interspersed with windows for the MARC Center. Before it was the Illini, I think it was named something else and was an early opera house. Karl says there is no trace of the former theatre left inside, and while the MARC may still utilize the space, I’ve never seen any signs of life when I go by. I’ll be back there for vacation next month, and will try to get more information from Karl.

I just got an e-mail from a person I know in Bloomington who says the MARC Center has moved. There’s now a sign on the door of the Illini that says, “Studio 222” but he hasn’t poked his head in to see what they do.

I was in Bloomington on vacation and picked up the following additional information about the Illini from a framed copy of a newspaper article about it on the wall in Luccas Grill next door:

The theatre was originally named the Chatterdon after the owner who also had theatres in Springfield and Danville, Illinois. It was built in 1910 to replace the Grand Opera House which had burned (there are shots of that theatre after the fire in a book of photographs of early Bloomington.) The Chaatterdon was built in 1910, and among stars who appeared on stage there were Ed Wynn, Ethel Barrymore, Mae Westg and Lillian Russell. It became a film house as the Illini in 1924 adnd closed around 1933, although for a time after that it was used for Community Players productions around 1946. After that State Farm used the space for offices, and presumeably removed any vestigaes of the Illini’s theatrical past, although from the outside the building still retains much of the look of the Chatterdon.

The Illini Theatre currently is the TG Center (see my picture posted above). I am not sure what that is and I can’t find it listed online.

The AKA should be spelled Chatterton. Here is a web page with pretty much the same information about the Chatterton Opera House/Illini Theatre that is in RobertEndres earlier comment, but with the additional information that the Chatterton was designed by local architect George H. Miller.

There is now a comedy club operating in this theater.

Wow, I’d oddly never realized this used to be a theater years ago, when I was last in Bloomington(sometime during my brief Illinois State University days in the mid-2000s). Guess I should’ve guessed that, based on the exterior.

Status should be closed. The comedy club folded July 2014.

The Grand Opera House/ Chatterton Opera House/ Illini Theater – Originally The Grand Opera House opened on February 2nd 1891 and located at 108 E Market Street. Mainly vaudeville acts, occasionally showing nickelodeons. It burned on May 3rd 1909, and the current building was built at the same location as The Chatterton Opera House and opened on April 7th 1910. Also vaudeville acts – with the exception of showing the silent film “Birth of a Nation” in January 1916 as part of a national tour. Closed and reopened as Illini Theater on October 5th 1923, showing vaudeville and movies. Closed in 1933. Still standing and being used as a church today.“ (Abundant Life In Christ Church)