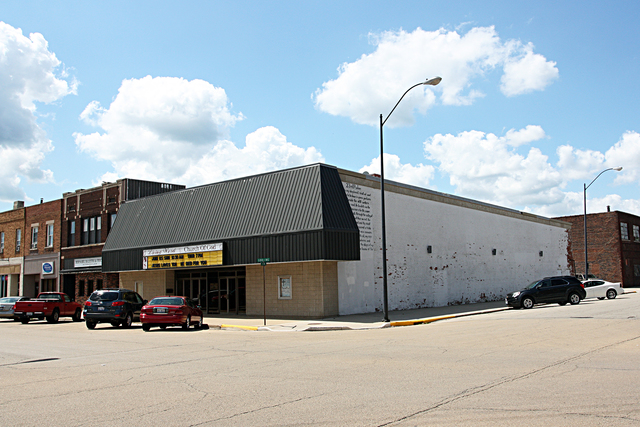 The Majestic Theater, which was open from at least 1915 and stood on Gooding Street at 2nd Street. In 1936 it was remodelled to the plans of architect D.N. Sandine. It is shown as being operated by John Balaban a subsidiary of Paramount Pictures Inc. in the 1941 Film Daily Yearbook. It is part of the Alger Theaters chain of LaSalle by 1951 (in fact, the 1951 and 1953 Film Daily Yearbooks give the theater address as their corporate office).

Cinematour lists the theatre as being demolished. It was the main theatre in LaSalle when I was growing up in Illinois, and although I was only in it once, I have one very vivid memory of the theatre. When I was a candidate for admission to the LaSalle County I.A. local which covered my hometown of Streator, I went to LaSalle to introduce myself to the projectionists there who would have a vote on my membership. I had heard that several of them were waiting for the projectionist (an old-timer)at the Majestic to retire so they could have his job. When I went to the booth, which meant going through the Men’s room, I climbed a flight of stairs and found myself up near the ceiling over a steep balcony. While the booth was fairly deep and roomy, I was shocked to see that from the viewing ports you could only see the bottom half of the screen because of a beam located just outside the booth. The light from the projection ports just cleared the bottom of the beam. The projectionists had to mark cues on the bottom of the film frames in order to be able to make changeovers. The old-timer, who may have been there since the house opened was quite proud of the booth, but couldn’t see the top half of the movies he was projecting. I had this vision of him asking, “Does Greta Garbo still make movies? Boy she had a great set of legs!” The theatre went non-union when platters came in and the projectionists waiting for the job probably never got to hold it.

The majestic, was finally bulldozed from the center out, and turned into a twin cinema, GKC Showplace. Fortunately the booth was revamped, and you could see all of the screens. It closed in the mid 80s and is now a church.

Wow, “The Fury” is on the marquee in the 1976 photo. It’s actually 1977 or 78 though. "The Fury" was filmed partially in Chicago. We briefly met Kirk Douglas when he ran up to my car from a small Lincoln Park incline in front of the Cardinal's residence at North Ave. & State Parkway in mid77.

I had a 57 Plymouth Plaza, (much like a "Christine" Fury which was a58).
We had slowed down to look at some camera trucks, when Kirk ran up the hill to my drivers window and yelled “Ahhhh!”. Scared the begeezus out of us. He actually grabbed my driver’s door with both hands under the window. They had been filming and he was apparently goofing off during a break. I like to think that the then 20 year old car is what caught his eye.

This theater was one of my grandfather’s E.E.Alger. His offices were actually in the Art Theater after they closed the office on Gooding Street in La Salle just a half block from the Majestic. My father Jack E. Alger was in charge of promotions and actually had several “greased Pig” contests, as well as saturday night give-aways and during the war sold war bonds.

Architect D.N. Sandine gave the Majestic a streamline moderne makeover in 1936; before and after images in photos.