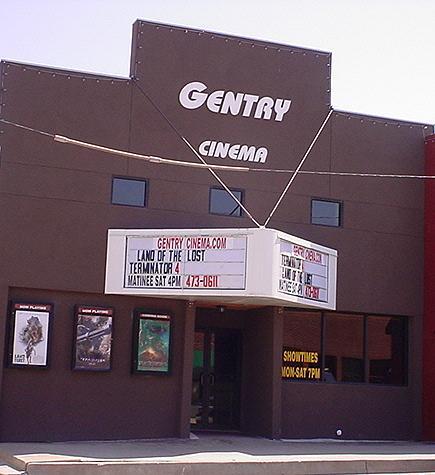 In 2013 it was taken over by the husband, wife & son team of Allen Theatre Management who were contracted to reopen the cinema. The Allen team (Bob, Emilie & Tim) plan to make it a ‘Family Friendly Theatre’, and according to General Manager Bob, “The community response has been overwhelming”. The Gentry Cinema re-opened on December 13, 2013, and will still be running on film. It operates nightly, with matinees on Wednesday, Saturday & Sunday. It was closed in 2014. New operator took over in 2017 and a digital projector was installed in February 2018. New screens and digital audio system have been installed as well a new rocking seats. It reopened March 16, 2018.

I’m the current owner of the Gentry. I’ve posted several more interior and exterior photos for those who are interested. Just click the photos tab to view them. The place is still for sale.

I see this is still for sale. Have you thought about doing a lease on it?

The Gentry will re-open December 13th under new management. The theatre is still owned by Richard Coleman and managed by the Allen Theatre Management team of Bob and Emilie Allen and their son Tim.

This theater could easily operate again if digital projection and sound equipment were added. This would provide a much greater chance of success than what the previous operator had. Without digital equipment, there is almost no availability of movies to show.

he Majestic appears to have launched February 2, 1912 with the Bison film, “The Missionary’s Gratitude.” The Majestic went out of business in 1917 when Trevor Faulkner created the new Cozy Theatre. The location became the W.I. Cook Hardware store from 1917 to 1940. Vera King took on the location and converted it back to a movie theater called the Gentry Theatre. Its first day was on May 15, 1941, appropriately opened with Bob Wills in “Take Me Back to Oklahoma.”

2021, open Fri Sat & Sundays according to their facebook page