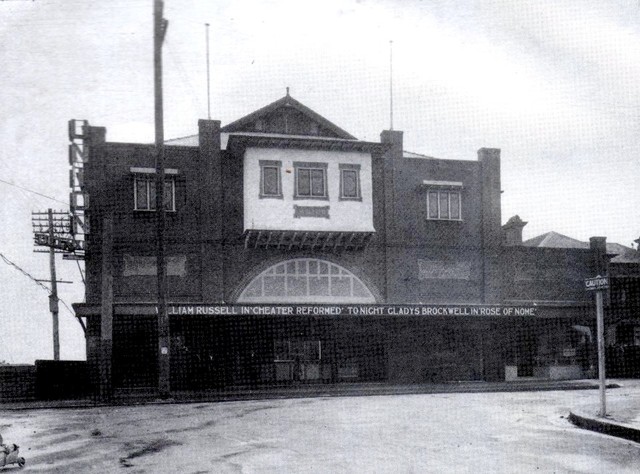 The De-Luxe Theatre, located in the Sydney suburb of Croydon, opened on 14th January 1921.

A substantial brick building, the De-Luxe Theatre was a two level theatre. Its facade was broken by part of the projection box which was built out over the theater’s cantilevered street awning.

Internally, the auditorium was covered with a wooden lattice ceiling. The dress circle was large and boxes extended along the side walls to the proscenium, which was surmounted by plaster figures representing the arts.

The De-Luxe Theatre closed in 1960 and was converted into a roller skating rink, which it remained until 1968. Burwood Municipal Council purchased the property, and during 1970, the theatre was demolished.

Suggestions in the local press were made to convert the building into a recreational and social center for local youth, but this did not happen. Today, the suburb of Croydon now contains a park where the De-Luxe Theatre once stood.

One of the completely forgotten sites and one that was lost early in the Tv purge. Incredible to believe it had a 38 year career as a social hub and then was absolutely erased. This happened to so many Sydney cinemas. I am sure every person who views these sites can say the same in their city. Except MICHAEL of course, who will just print something so stupid it ignites a world wide retort. yeesh.

does anyone have a photo or poster?