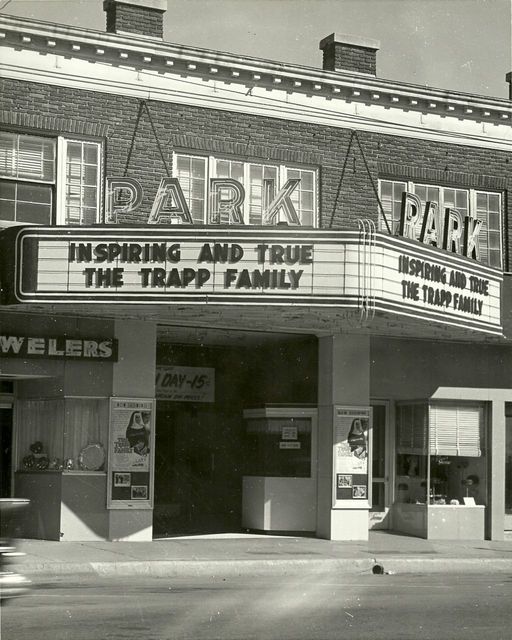 The Adelphos Theater was opened April 19, 1921. It was renamed Ritz Theater in October 1927. The name was later changed to Park Theater. It primarily showed B-movies and westerns.

After closing it spent some time as a retail arcade, and a bar. It was demolished in summer of 2015.

Sharp focus antique photographs of this movie house, when it was still known as Ritz, can be seen by typing word “ritz” on site below.
View link

A 1987 photo of the Park Theater building in Ardmore.

A view from 2009 of the Ritz / Park Theater building in Ardmore.

Vintage photos of the Park (AKA_Ritz) Theatre can be seen;
http://www.roadsideoklahoma.com/driveinsok

This is what the Park Theatre looks like nowadays,
View link

1926 and 1954 grand opening ads in photo section. It closed when the Video Twin opened.

The Adelphos Theatre was to open on Tuesday, April 19, 1921, according to a brief article in the previous Sunday’s Daily Ardmoreite. Through the early 1920s, the Adelphos, the Princess, and the Palace were the three theaters that advertised in the newspaper regularly, and they were all within a block of each other on the north side of West Main Street. It must have been the brightest block in Ardmore at night.

Here is an item from the October 7, 1927, issue of Motion Picture News:

“The Ritz Theatre, at Ardmore, Okla., which was formerly the Adelphos Theatre, is having a new $25,000 organ installed about October 1st. The Ritz has been remodeled and redecorated since the Griffin [sic] Amusement Company secured interest in it and two other theatres in Ardmore a few months ago.”

The October 21 issue of the same journal had this follow-up item (this time with the correct name of the new owners):

“The Griffith Amusement Company, Oklahoma City, plan upon opening two theatres within a week. The Ritz theatre, at Ardmore, is scheduled to open October 14th. This is the old Adelphos theatre, which has been completely remodeled and redecorated and renamed. The other is the beautiful new house at Shawnee, the Bison, which will open between October 16th and 18th.”

Another item appeared in the issue of October 28:

“The old Adelphos theatre, Ardmore, Okla., which has been entirely remodeled and redecorated and refurnished, opened last Wednesday night. The Griffith Amusement Company spent $50,000 in rejuvenating this theatre. It has been renamed the Ritz.”