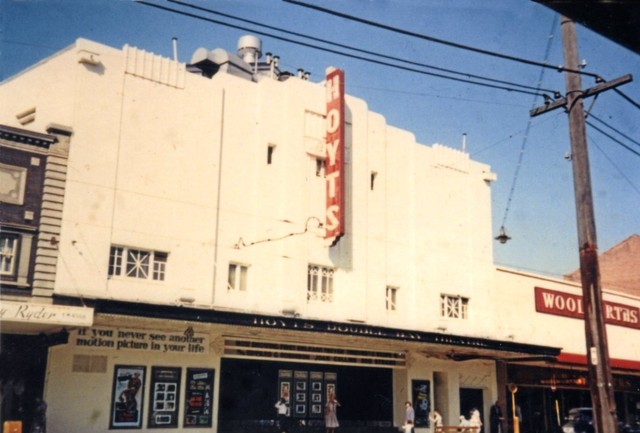 This theatre was located in the upmarket Sydney suburb of Double Bay. It opened as the Southern Cross Theatre on 23rd May 1924, and seated 1,388 patrons. Later taken over by Hoyts, and re-named Hoyts Double Bay Theatre, it became one of the first movie palace casualties, when it was closed and demolished in late-1963.

It was replaced with a supermarket and the furnishings went up the hill to the sensational 2100 seat Bondi Junction Star. Of course if it was better programmed and nurtured,it would have benn the premier (wealthy) Eastern Suburbs cinema, like the nearby Vogue became in the 70s-90s as the Village twin, now with a land value alone of about $10 million. The Hoyts above was a beautiful 1933 deco renovation and was very much a deluxe house. Other crummier Hoyts cinemas remained and were kept but this one, for some weird reason only known to Hoyts at the time ($$$ probably) was cut short and trashed. It was truly beautiful.

This theatre was originally known as the “SOuthern Cross”. It was built by E.L. Betts theatres in the mid 1920’s. Hoyts took over Betts theatres in 1927. It was rebuilt in in 1936c. Hoyts Double Bay was featured in the 1948 production called “Guest in Our House”. This film was made by Fox Movietone News as a training doco for the staff of Hoyts Theatre Limited. It starred that late Pat Firman. All those persons appearing in it were actors from J.C. Williamson shows.

The photograph shown was taken by the the late John Alfred in December,1959.

Originally opened in May 1924. The Hoyts Double Bay Theatre closed on 1st August 1963.

I think the site is now Woollahra Public Library and a bank(NAB)?

I worked there as an Assistant Projectionist in 1958-1959. It is where I met my Wife who worked opposite at at the 1 2 3 coffee lounge. I have very good memories of the time. The projection Room was standard Hoyts. It was quite a large theatre.I only left because I got a position at the Commonwealth Film Censors office as a Projectionist. I came to Double Bay as I had worked at the Metro Kings Cross. When the film GIGI was released the screenings were reduced from Four to Two a day, Last on First off. The Good Old Days, Young and Single and carefree.