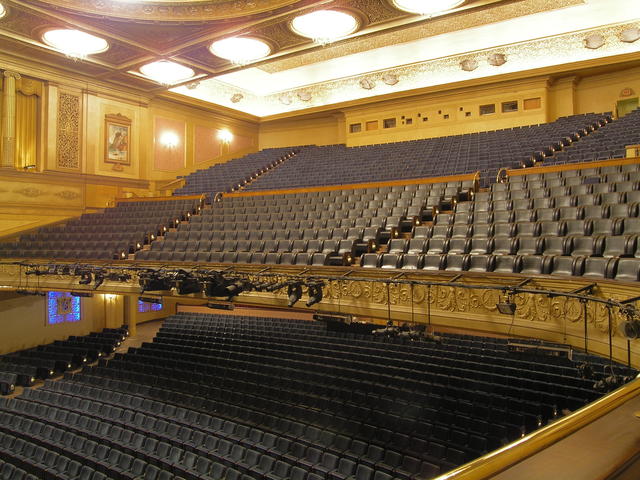 The Melbourne Regent Theatre opened on 15th March, 1929 with Ronald Colman and Vilma Banky in “Two Lovers”. It was one of the largest theatres to be built in Australia by the Hoyts chain, seating 3,277 people in opulent splendour with the largest WurliTzer theatre organ installed in Australia at that time. The 4 manual, 21 rank instrument was opened by Stanley Wallace.

At 1:00am on Sunday April 29, 1945 a fire was dicovered by the theatre’s nightwatchman (thought to have begun in the circle area), and the theatre auditorium and backstage area was completely destroyed by the fire. All that remained was the main entrance and foyer. Despite wartime building restrictions, the theatre was completely rebuilt to the plans of architectural firm Cowper, Murphy & Appleford. It was given a modified proscenium shape and a replacement hybrid WurliTzer 4 manual, 19 rank organ, made up of organs from the Ambassadors Theatre, Perth and the Lyceum Theatre, Melbourne. It was opened by organist Len Davis. The Regent Theatre reopened for business as a movie palace on December 19, 1947 with Cornel Wilde & Maureen O'Hara in “The Homestretch”.

After another long period of successful operation, the Regent Theatre closed once again on 1st July 1970 with Vince Edwards in “The Desperados” and Rachel Romen in “The Desert Raven”. The organ had been removed after a final concert in 1969. The theatre was stripped of all its fittings. Plans to demolish the theatre for a multi-level office block were thwarted, thankfully, and the long saga to ‘Save the Regent’ began.

After 23 years of frustration, hope, and tears, a property developer, David Marriner instigated a plan in 1993 to fully restore the theatre. The Regent Theatre was faithfully restored to its original grandeur, even down to the smallest detail. To prepare it for its role as a ‘lyric’ theatre, necessary alterations were made, such as a new sloping floor to improve sightlines, additional height to the flytower, and more dressing rooms.

On Saturday August 17, 1996, Melbourne’s ‘Palace of Dreams’ finally re-opened in true Hollywood fashion with its third WurliTzer organ faithfully installed (this 4 manual, 36 rank instrument was originally installed in the Granada Theatre, San Francisco, California in 1921). The restoration work cost around $AU37 million. Since then the theatre has been the home to some great musical stage productions including, “Sunset Boulevard”, “Show Boat”, “Fiddler of the Roof” with Topol and “The Lion King”.

On 14th November 1997, movies returned to the Regent Theatre for the first time in 27 years, with a fully restored print of “My Fair Lady”, which ran for an extended season. The Regent Theatre was closed in 2019 to undergo a $19.4 million restoration & renovation, which were completed in January 2020, reopening with a production of “War Horse”. Movies are occasionally screened.

The Regent Theatre is listed on the National Trust Register.

The first conductor of the Regent Orchestra was Will Cade who went on to form the first ABC Symphony Orchestra in Adelaide. (A film made by Efftee Pictures – Frank Thring’s organisation – and he was one of the original directors of Hoyts who built the Regent – features Will Cade and the Regent Orchestra in selections from “The Desert Song” and was photographed in 1931). Another conductor was Gustave Slapovski who was a pugalist in his spare time. Slapovski first came to Australia in 1913 to conduct the Ring Cycle by Wagner.
In 1931 one of the stage shows featured a full stage production number of Ketelby’s “In a Persian Market”, complete with camels, other assorted animals and two elephants on loan from the Zoo. In the orchestra at the time was a young Bernard (later Sir) Heinze who was to become a famous orchestral conductor.
The first organist was Stanley Wallace, followed very quickly by another American – Eddie
Fitch. Stanfield Halliday played there for many years and even when the orchestras finally went in the early fifties, the Regent still had a resident organist – Tony Fenelon, when it closed for the 2nd time in 1970.
The policy of Hoyts was to employ blondes as usherettes in the Regent and brunettes in the Spanish inspired Plaza below.
What most people remember about the Regent is the wonderful and comfortable leather armchairs which were a feature of the Dress Circle. Happily these were a feature of the current restoration.
A memory of the Regent that stays with me is that of being the only person in the auditorium for a performance of “A Funny Thing Happened On the Way to the Forum” back in the mid-sixties. The usherette came down to my seat and said the projectionist would like to know what music I’d like him to play prior to the show starting! Of course in those days there was an art to playing a film- dimming the houselights, playing the pageants, then the curtain battons as first the house curtain parted and then the screen tabs…

Well donald4564! Rather belatedly I am querying one ‘fact’ in your comments above, have been meaning to reply for ages!!! You say you were sitting in the Regent for Funny Thing / Forum? This movie was screened at the Athenaeum opposite the Regent. And for the projectionist to know that you were sitting in the auditorium, you would have to be in the second balcony where the box is located? I shall be interested if you are sure that it was Forum that you were to see, or maybe a different movie, but in the Regent???
Otherwise, if I was still managing, there would always be curtains before and at the end. AND we used to cut those dam titles of any movie that went over the top – South Pacific at the Esquire for one!

Woops, got cut off re Limelight!!!! For this one, people loved this Chaplin movie so much, they started applauding it, but were cut off as the organist came on with the national anthem. I changed this so that we reinstated the end titles which gave the applause time to die down before the anthem was played. At least the titles weren’t as long as every movie has them today. Best tea lady; assistant to the senior coach driver; the secretary who typed the script – BAH !!!

Some links between the Regent Theatre & The Victory (now National) in St Kilda. Francis Thring (father of actor Frank Thring)was involved in both as was the architect. The Victory (c1921) was substantially altered in 1928 following the opening of both The Regent and The Palais (ST Kilda) in 1928. In 1970 Hoyts transferred the Regent projection equipment to the Victory where it still remains in perfect working order. Recent Heritage registration was granted to the Victory (National) as well as its contents including the Regent equipment and seating rescued from the now lost Tivoli Theatre.

Just in case you were wondering how this compared to the capacity prior to closure in 1970,

Here is a website with pages and pages of memorabilia and programmes at the Regent:

Undoubtedly a magnificent cinema gem, but as a “live” theatre, leaves a lot to be desired. Designed for film, the circle/balcony is so far removed from the stage that audiences feel they are sitting in the foyer of The Athenaeum Theatre across the street. Since the renovation, the few film presentations (Gone With The Wind/The Wizard Of Oz/High Society/My Fair Lady) and a few “premieres” have been sadly ruined by lack of screen drapes (in situ) and effect lightings surrounding the proscenium. Now air-conditioned, paint work and murals that survived over many years are now peeling due to the effect of humidity control.