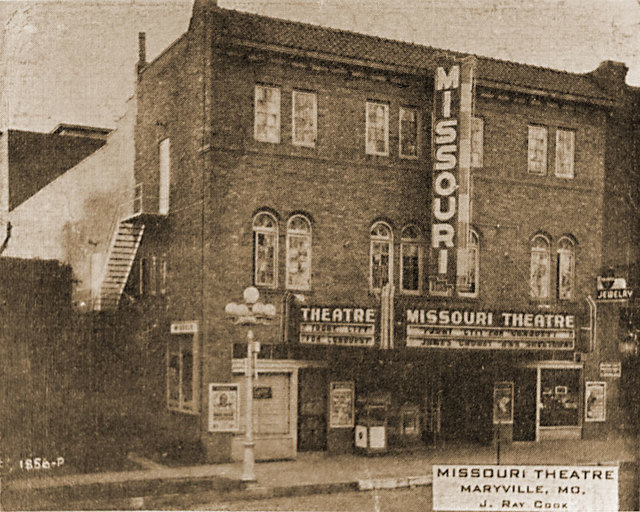 Here is a 4/29/44 article from the Maryville Daily Forum:

Spacious Show Place, Erected in 1926 by the Cook Family, Entirely Gutted by Flames After the Second Show Last Night.

Firemen Unable to Halt Flames That Start in Rear of Building

Fire which started soon after the second show had been completed last nighut about 11:30 o'clock totally destroyed the Missouri theater, leaving only the walls of the 18-year-old building standing. The Eugene Beauty Shop, which was located on the south side of the building was also destroyed. Nothing was saved at the Missouri, which was constructed and opened to the public in September 1926.

The fire last night was the second serious fire in the history of Maryville. The Empire theater, which was located across the street from the Missouri at the present site of the Masonic Temple and the Maryville Electric Light and Power company, was destroyed by fire in December, 1925.

The Missouri was built by J. F. Cook and his two sons, J. Ray,
the present operator of the theater, and Clarence K.. the present operator of the Tivoli theater. At the time the Missouri opened, it was considered as the most modern theater in this area. It had a seating capacity of 818, the main auditorium seating 540 persons, and the mezzanine, 218. It was designed by a Kansas City architect and followed closely the Spanish designs of show houses.

An advertisement for Boller Brothers in the July 10, 1926, issue of The Reel Journal lists this house as the Cook Theatre. David and Noelles list of known Boller theaters gives the house the aka’s Cook and Missouri Twin.

Good history and info provided.Pity it couldn’t be saved,so many small towns lose so many classic theatres.

I’m not sure how destroyed it was in the fire. Old photo is from 1940, and aside from the loss of the tile roof, the structure appears identical. I imagine the structure was gutted, but was able to be reused. At some later point, the ground floor got an ugly remodel with cheap aluminum doors and tacky dryvit covering the shop windows. Not sure when it closed, but the 2009 streetview shows the marquee already gone, and the building clearly vacant.

I added a photo from just before demolition.

The site is now a grassed area(park?) next to a methodist church.

It’s just a vacant lot. Doubt anything will ever replace the buildings that were there, although the church has built an addition on the site of the little building that was to the left of the theater (maybe a telephone exchange?). Between church parking lots, drive through banks, and general neglect, downtown has shrunk quite a bit.