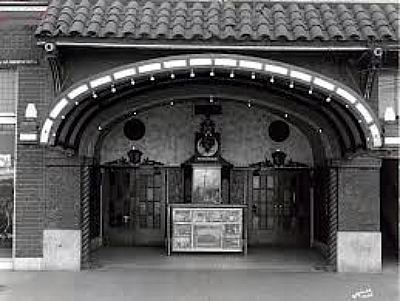 The Cameo Theater was located in the old town of West Tulsa, which exists now only as a Tulsa community. The theater was opened in 1927 and closed in 1955.

Vintage interior/exterior photos can be viewed by typing in word “cameo”,
View link

Oklahoma Historical Society remarks that Griffith Bros acquired the Cameo Theatre in 1940, and then replaced it with the Rita Theatre.
1934 images reveal a Spanish Mission exterior (bet those entrance doors were composed of green & orange glass) that looked as if it probably dated way back to nickelodeon times. Tht original generic “movie house” auditorium wasn’t much to look at, but it sure was better than the cheap Griffith replacement.
On the OHS web site, the Cameo auditorium is mistakenly shown again as that of the Circle Theater.
Most Tulsa citizens felt no loss after the Rita Theatre burned.

The Cameo had a “reverse” cinema layout.

i remember last going to the cameo theatre in 50 or 51. we saw the serial rocket man and tried to participate in the duncan yo-yo contest. don’t understand the statement that it was replaced by the rita in the 40s

oldguy42 the Rita Theatre has its own page on Cinema Treaures and yes it was a different theatre.Rita