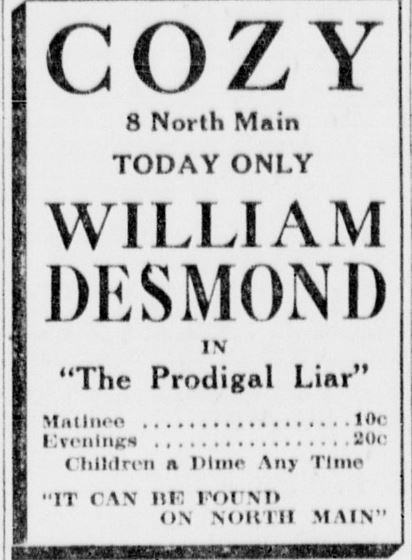 The Cosy Theatre was opened in the 1910’s. It was closed September 13, 1960 with Brigette Bardot in “Babbett Goes to War” and Alec Guinness in “Our Man in Havana”.

While visiting a dear friend in Tulsa a few years back, his beloved great uncle told us all about the Cozy Theatre.
Decorated inside/out in Southwestern styling with earth tone colors, unglazed red tile, and rough stucco, the clean Cozy Theatre was popular amoung both white and black audiences. A T-shape lobby flaired out into a wide standee. Lighting fixtures were composed of hammered iron and amber tulip glass.
Auditorium sidelights gave off an amber glow that was warm and comforting. Because of its steep slope, main floor seating was stadium type, but there was also a good size balcony that was a “make out” spot for teenagers. An oversized movie screen had to be placed exactly at the right sight line in order to keep balcony rails from blocking rear seat views. Rough wood beams supported a stepped ceiling, silk and velvet tapestry dressed sidewalls, while amber valour drapes defined the stage.
Rows of tracks ran beneath the Cozy Building and during it last years the shuttered theatre became home to rail tramps. Many years passed before a wrecking crew finally came to tear down this dilapidated, but still lovely little movie house.

Melba:
A very accurate description of the old Cozy Theatre. Due to the floor slope the entire interior was a “form follows function” step pattern. In keeping with this scheme auditorium isles on both the main floor and balcony ran along side walls.
Because multiple railroad tracks ran underneath this structure it was not so much torn down as it was dismantled. Wrecking crews had to take the building apart piece by piece, reversing the process it took to build it.

A c1930s rooftop view of the Cozy Theatre. On the opposite end of the same bridge sat the Uptown Theatre.
http://www.tulsalibrary.org/JPG/B1378.jpg

When this c1970 shot was snapped the Cozy Theatre was already falling into ruin, blade sign and boxoffice long since removed -
http://www.tulsalibrary.org/JPG/E0070.jpg

Besides the Cozy and Uptown, other theatres can be seen in the (04/28/07) posted photo. Photo center, at the bottom of the viaduct can be seen the Lyric Theatre. Photo left, the Grand Theatre can be seen next to the Bliss Hotel.

You can have a lot of fun on this link by typing in words such as ‘drawing’, ‘architecture’, ‘theatre’, and other theatrical terms …

Tulsa, Okla.-E.J. Baker got tired as the feature unwound at the Cozy Theater here and decided to go to bed. This he proceeded to do by removing his trousers and curling up in a seat where for a time he passed unnoticed. During a break in the show, he was arrested on a drunk charge.

If I can upload the actual article and striking B&W picture soon it will explain itself but… Several of the single-screen B-picture theatres of Tulsa all closed around September 1960 for some reason (perhaps simple urban decay). A Tulsa Tribune story, “Final Curtain Falls at Cozy/Nearly Half Century of Screening Ends,” pp. 30, featured a same-day interview with the Cozy’s owner, 65 year-old Ben Wright (looking in the distance with the Cozy’s now-blank marquee behind him), lists the address as 2 Main Street instead of 8 Main, and closed on Tuesday, September 13, 1960, the final double-feature being Brigette Bardot in BABETTE GOES TO WAR, and Alec Guinness & Burl Ives in OUR MAN IN HAVANA.