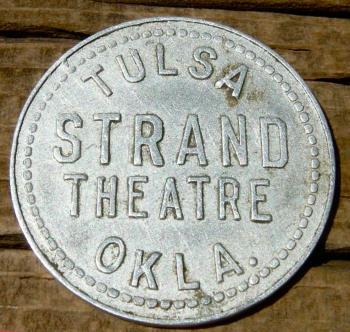 May have used a Reproduco for silent films. This was a organ and piano combination instrument that played by paper rolls that was popular with theaters of the ‘20s.

Photo right of this c1907 image can be seen the arched entrance of the Strand Nickelodeon, just beyond Palace Clothiers. Lyric Theatre is seen photo left.
http://www.tulsalibrary.org/JPG/D8162.jpg

Above photo clearly illustrates that the Strand Cinema started life as the Wonder Land Theatre, probably Tulsa’s first movie house.
This 1885 photo depicts what may have been Tulsa’s very first stage theatre, the Famouse Variety Show, operated by Jack Marris. As native Tulsan Paul Harvey might say, photo caption tells “the rest of the story”.
http://www.tulsalibrary.org/JPG/A0404.jpg

A Boxoffice item of December 3, 1949, says this: “Vern Hester has sold Tulsa’s oldest operating theatre, the Strand, to provide room for an expanded furniture store. Built in 1909 by L. W. Brophy, Muskogee theatre owner, it was known as the Yale.”

The Strand had been offered for sale in a classified ad in Boxoffice of July 16, 1949. The ad said that it was a 320-seat grind operation with attractive grosses.