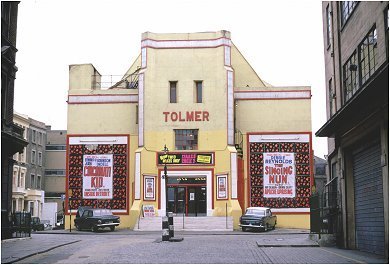 Situated just to the West of Euston Railway Station and one minute from Warren Street tube station, the Tolmer Cinema was London’s most (im)famous flea-pit cinema. It specialised in terrific double bills of movies usually on their sub, sub-run. Programmes changed three times a week: Sunday for one day only, Monday-Wednesday and Thursday-Saturday. Prices were the cheapest in London, even when it closed in 1972, it cost only 15p in the stalls and 25p in the circle (seniors and students half price!). The audience were a mixture of movie-buffs, homeless street people, a scattering of prostitutes and their potential clients and a few gay men looking for their own kind.

It was all rather different in 1863 when the building was built as the Tolmer’s Square Congregational Church. Cinema operator George Smart took over the building and converted it into the Tolmer Cinema which opened in May 1924. The church spire which soared above the entrance was removed in 1929 when the cinema was refurbished. Part of this refurbishment was the installation of a Style 150-Special Wurlitzer 2Manual/5Ranks organ, which was opened by organist Arthur Jenkins.

It suffered some slight damage during the early part of World War II and after some restoration it re-opened with programmes for family audiences (still on three changes a week of double bill programmes). The Wurlitzer organ was removed at this time and was installed in the Imperial Cinema, Canning Town. The building had been re-faced with a modern frontage but down the side walls were still visible the church like windows, now bricked in.

By the late-1960’s the historic Tolmers Square with its Georgian houses and the Tolmer Cinema in the centre were ripe for re-development and with the cinema facing extensive repair bills, the Tolmer Cinema finally gave up the ghost. It closed on 22nd March 1972 with a typical (for its latter years) double bill programme ‘For 3 Days Only’: Lex Barker in “Die Slowly, You’ll Enjoy It More” and Frederick Stafford in “The Looters'”.

The building lay empty for a few years and then the entire Tolmer’s Square and surrounding area was demolished and new offices, residential units, bar and shops were built on the site.

A couple of exterior photos and some history on the Tolmer Cinema, Euston, London here:
http://www.tnunn.f2s.com/tolmer.htm

Not sure if the expression “gave up the ghost” in Ken’s excellent history of the Tolmer is a pun but, according to a letter I received from the manager, the Tolmer was supposedly haunted by a ghost, which was seen on numerous occasions in the balcony. According to locals, the reason why this elegant square was ripe for development is that the landlord, who owned all the properties, allowed it to fall into decay, so that he could sell it off at a vast profit.

The Tolmer Theater had a 2/5 Wurlitzer

@Ken – Great pics. There’s a description and drawing of the Tolmer on p32/3 of Geoffrey Fletcher’s London (Hutchinson, 1968). Your ‘67 picture and Fletcher’s drawing have have the exact same films showing. Guessing that both the photo and drawing were taken in the same week of Monday 6 March 1967.