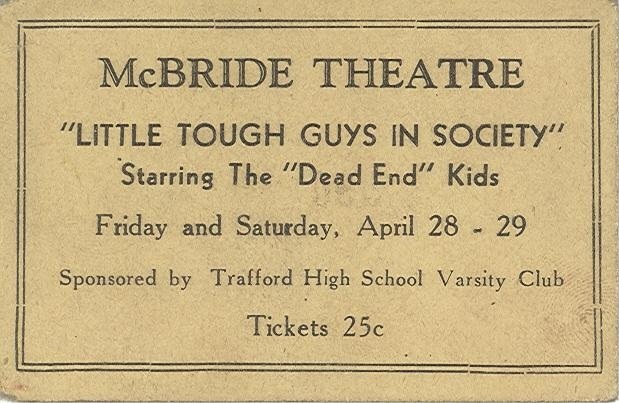 Opened in 1921, the McBride Theater was remodeled in 1948 to the plans of architect Casimir J. Pellegrini. It is now home to Sherm Edwards Candies. “In 1977, Sherm and Dorothy purchased the old McBride Movie Theater in Trafford, renovated it and opened for business as Sherm Edwards Candies on December 8th, 1978”.

Clarence and George McBride, who operate the McBride Theater, have been in exhibition at Trafford for 42 years.

My mom took me to this theatre to see Fantasia in the late 60’s. We only lived a few miles from it, up on Haymaker Rd.

“J. McBride has built a $40,000 theatre at Trafford City, Pa. Yes, indeed, and some house it is, too, right up to the minute as far as modern houses are concerned. Mr. McBride is also in the grocery business there.”

The July 10, 1948, issue of Boxoffice said that the McBride’s had plans to remodel their 1921-vintage theater at Trafford City:

“TRAFFORD, PA. — The McBride Theatre will be closed for several months for extensive remodeling from wall to wall and from ceiling to auditorium floor. Exterior modernization will include installation of a glass front and a new marquee. Auditorium and lobby will be newly painted, reseated, re-carpeted and new lighting systems and equipments and other fixtures will be installed, according to C. F. and George McBride. Among new features will be an enlarged lobby, a candy bar and new rest rooms. David Martin & Son has the general contract for the remodeling and the architect is Casimir Pellegrini.”Casimir J. Pellegrini practiced architecture in Pittsburgh for about forty years from the 1920s into the 1960s.