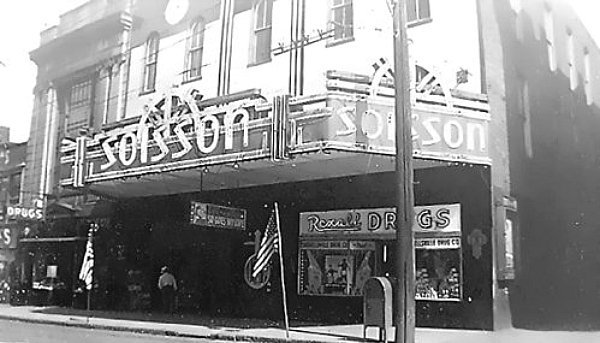 Architect for the new Art Deco style theatre was Harry C. Altman. The ‘New’ Soison Theatre was opened on November 24, 1937 with Eleanore Whitney in “Blond Trouble”. It was closed on August 14, 1956 with Burt Lancaster in “The Crimson Pirate” & Theodore Von Eltz in “Animal World”. It was demolished on April 6, 1959 for a bank to be built on the site.

According to volume 2 of a 1912 publication, “Genealogical and personal history of Fayette county Pennsylvania”, by James Hadden, the Soisson Theatre was built in 1907 by Joseph Soisson. It was originally designed as a venue for live performances. I haven’t been able to find anything else about its early history, but it was showing movies in 1928.

The Soisson Theatre had been dark for many years when it was renovated and reopened by Vernon F. Scott’s Ideal Amusement company in 1937. Boxoffice of November 20 that year said that the opening was scheduled for November 24. The architect for the extensive remodeling was Harry W. Altman, Sr. of Altman & Altman, Uniontown, Pennsylvania.

The Soisson was acquired by the Warner-affiliated Brown Amusement Company in 1941. Boxoffice of August 1, 1953, said that the Orpheum Theatre at Connellsville had reopened after being closed for six weeks and that the Soisson Theatre was scheduled to go dark. The Soisson is mentioned again in Boxoffice of May 22, 1954, in an item saying that it would be operated on weekends only.

The Soisson and Orpheum are mentioned as the only two theaters still oeprating in Connellsville in Boxoffice of September 26, 1956. I haven’t found the Soisson mentioned as an operating theater in any later issues of Boxoffice. The Orpheum operated at least as late as 1965, but was closed and its equipment sold by 1971.

Another photo can be found in the third row of thumbnails on this page.

The original Soisson Theatre was architected by C. Ender Urban launching on December 17, 1907 likely on a 20-year lease. Brick magnate Joseph Soisson opened the theatre in an apartment building and was located at 118-122 West Crawford Avenue in downtown Connellsville.

In 1927, new lessee C.A. Wagner took on the theatre likely on a 10-year lease. Wagner ceased operations on June 7, 1929 without converting to a true sound system. The theatre was dormant until 1937 when it was almost entirely removed for a new Soisson.

The New Soisson Theatre launched on November 24, 1937 with “Blonde Trouble.” Harry C. Altman was the architect of the, now, Art Deco theatre which used little of the original Soisson. The theatre plan had been approved by the Pennsylvania Department of Labor and Industry in 1937.

Though used for sporadic events thereafter, the final films at the Soisson were on August 14, 1956 with a double-feature of “Crimson Pirate” and “Animal World.” The Gallatin Bank put an end to the Soisson altogether razing the structure on April 6, 1959 and building a bank onto the property in 1960.

I don’t think the statement about it opening smaller is correct. It’s huge on the 1908 map. The auditorium was well back of the street, connected to the front (which also had a bank and a store) by a short corridor. It’s shown as three stories tall. Perhaps the remodel removed one story from the front section? I doubt they completely rebuilt the auditorium.