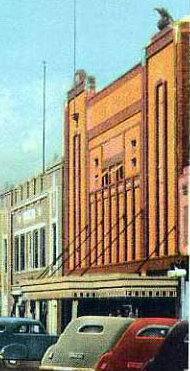 The Pace Theater owned by Jim Pace opened on April 3, 1916 with the play “Kentucky Sue”. At that time it had a seating capacity of 475. It was closed in January 1925 when the new Pace Theatre opened. (it has its own page on Cinema Treasures as the Eagle Theatre). The building is used as retail space today.

Here is a link:
http://www.chadron.com/history/tour02.php

From the early 1900s a postcard view of Main Street along with the Pace Theater in Chadron.

The new location was announced in 1923 with architectural plans by E.B. Watson of Norfolk. The original Pace continued until January of 1925 when the New Pace opened nearby. The new Pace has its own page as the Eagle Theatre, a name it received in 1967.