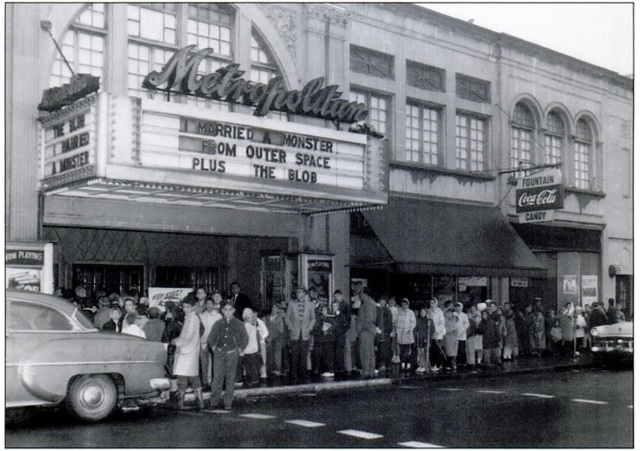 The MGM Theatre Photograph and Report form for the Metropolitan Theatre on Central St. in Leominster has a facade photo taken in April 1941. The theater entrance was in the middle of a rather imposing building. The photo is a wider angle than the photo posted above by Lost Memory. The Report states that the Met. Theatre has been a MGM customer for over 7 years; that it’s over 15 years old; that it’s in Good condition; and has 844 orchestra seats and 555 balcony seats, total: 1399 seats. There is one competing theatre in town, the Plymouth Th. The 1940 population of Leominster was 22,200.

From the google photograph it looks like this theatre is now an empty lot.

This is from Boxoffice magazine in August 1962:

LEOMINSTER, MASS.-The Metropolitan Theater is undergoing a facelifting. Ray M. Butterfield, manager of this town’s one remaining film theater, said that improvements would include a new marquee, restroom updating, painting, redecoration and a general housecleaning.

Here is part of a December 1976 article in the Fitchburg Sentinel and Enterprise:

LEOMINSTER â€" Once a proud and nearly majestic theater, the Metropolitan Theater Building on Central Street is apparently facing the wrecking ball. Serious structural defects have been found in the building, including major cracks in the rear wall, by the building department. If the owner, John D. Latchis of Keene, N.H., does not move to make the necessary repairs, Mayor John B. McLaughlin said the city will attach a lien on the property and have the building razed.

The Metropolitan Theater closed a decade ago, the last of a number of downtown movie houses which served up a variety of shows for public consumption from the 1930s through the early 1960s. During the years of World War II, the theater often featured war movies which instilled patriotism among the youth of the city. In the depression years, the theater was the one major form of entertainment still affordable by the masses, and to make the buy even better, dishes were a frequent giveaway to patrons. In the 1950s and early 1960s, the theatre offered the favorite diet of the youth, horror movies and films with rock and roll stars in California beach themes.

Since its closing, several people made efforts to convert the theater to various uses, even at one time considering it as a possible site for an indoor mall, and at another as a possible drop-in center for the city’s youth. The building now is largely vacant, except for pigeons roosting inside broken windows, and few storefront businesses using only a minimum of the building’s room.

Mayor McLaughlin has hinted that even if Latchis should want to renovate the building, such action is unlikely. He said the defects would warrant removal of a portion of the rear of the building, renovations to the front of the building, and moving boilers used to heat the structure. All of that would be costly.

McLaughlin said that if demolition is decided as the alternative to repairs, federal Community Development Act funds will probably be used to raze the structure. If that happens, the city would put a lien against the property, either to be paid by Latchis or anyone seeking to purchase the land where the building once stood. Demolition of the property would place a major opening on Central Street in the heart of the central business district.

The Sentinel followed this story in March 1977 with several photos of the Metropolitan being demolished.

So the Metropolitan was closed around the mid-1960s and then demolished in early-1977. I assume that the last owner, John Latchis of Keene NH, was a member of the theater-owning Latchis family.

The Metropolitan Theatre was built in 1928. The March 5 issue of the Fitchburg Sentinal said that owner Frank Tragia had leased the house, still under construction, to an unnamed operating company.

There is a photo of the Metropolitan Theatre on page 70 of Thomas K. Hazzard and Diane M. Sanabria’s Leominster (Google Books preview.)

The July 15, 1928, issue of The Film Daily said that the theater being built at Leominster by Frank Tragia had been designed by a Worcester architect named John S. Balzara. I’ve been unable to find any other references to an architect of that name, or even of any similar name, and I think that the magazine might have gotten it wrong. Maybe somebody familiar with architects of the period in the region can figure it out.

Opened in April 1, 1929 with DeForest Phonofilm sound and Robert Morton Unit Organ. The theater closed abruptly just after opening. New operators were in place reopening October 10, 1929. The competing Plymouth Theatre took over the Metropolitan in 1930. The last show appears to be “Blow Up” on June 6, 1967 with demolition ten years later in 1977.