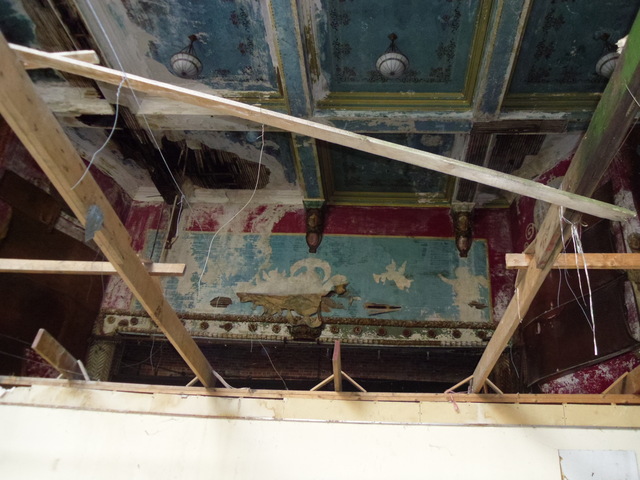 Years ago a store was built into the shell of the auditorium over the seats! But it had no stage house, no pit, nothing beautiful. I do believe it had a small balcony. The auditorium has been demolished, but the Husson Building remains and is being restored in 2018.

The ROYAL, or what’s left of it, is located in a building called The Husson Block diagonally across from the Pollard Library on Merrimack Street. It is located at the edge of a district called Little Canada and well-known to Jack Kerouac. It and the State, The Crown, the Capital, and the Palace, constituted the neighborhood theatres in Lowell. The theatre was owned by the Husson family. Years after it closed, a daughter…Nellie Husson, I believe, reminisced about travelling to Boston with her father to arrange for the second-run movies they would show. As was practice at the time, the bill was changed twice a week. The Royal had a square marquee with the name “Royal” in big block, red neon letters on three sides. Above the entrance were three floors of apartments. About all that can be said for the Royal is that it was an entertainment bargain. It was quite undistinguished.

According to this website, the Royal Theater is located at 484-486 Merrimack Street. It’s also still there, in a highly advanced state of dilapidation.

According to the information provided by a firefighter who examined the property, the theater is still mostly there. However, the roof has failed, the orchestra pit and stage area have fallen into the basement, and the water/ice damage is extensive. The balconey is dangerously close to collapse, as well as the rest of the roof. A main beam running the widith of the bulding has fallen down into the auditorium, and the remaining beams are sagging badly. It sounds like it’s too late for this not-so-polished gem.

The fire department has condemned the building because of the highly unsafe condition the theater is in. The red and white “X” signifying a condemned building appears in the photo on the website, but is not in the Google Streetview picture. However, look down at the top of the building in the aerial map does reveal what looks like roof damage.

Hopefully this helps solve the mystery of the Royal Theater, somewhat.

The theater was opened as a movie house at 488 Merrimack in 1911 by Charles Harfort as the Jewel Theater. In 1913 he purchased property across the street at 507 Merrimack and built a new 1200 seat theater he called “The New Jewel.” Though he had planned to close the original, it operated as the Royal as early as 1914 until 1964.
Here are some exterior shots of it today.
http://www.pbase.com/jroy/low_royal

Sorry, that should be “Charles Harpoot”

I am the grandson of George Husson, the owner of the Royal. Just logged onto this page. Very interesting to see all of the information about the theatre.

Thanks everyone – I’m finally doing something with this info and you’ve got me off to a great start! Can’t seem to find a photo (except for the ones provided here of the way it looks today) If anyone has or knows of a photo of The Royal or The Jewel when in operation I’d love to see it. Thanks again! Chris

Status should be demolished.