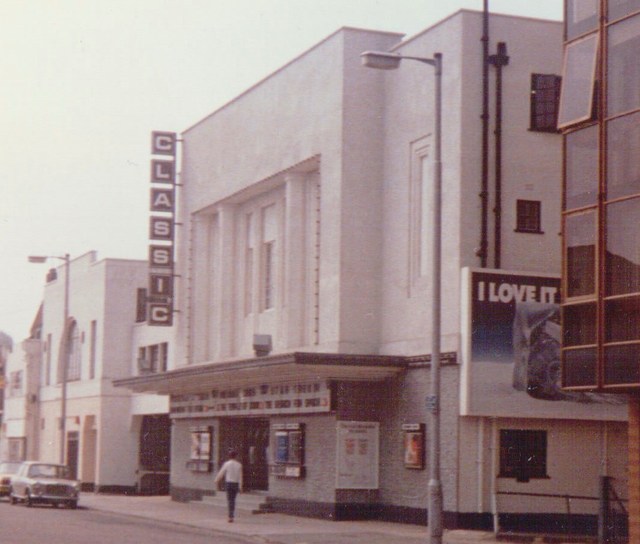 Built in 1934, the Carlton Cinema was originally a single-screened luxury cinema complete with balcony and bar. Although the cinema sustained incredible damage during World War II, it was renovated and re-opened.

In 1982, it was given a complete overhaul and turned into a three-screen cinema, the upper circle having been seperated and transformed into two smaller screens.

Today, in 2005, it has been through many names and companies - Carlton, Classic, Essoldo, Cannon, ABC, Reeltime, Odeon and, most recently, Cineplex - but has constantly been on the brink of extinction. Currently under poor management and falling apart piece by piece, only public petitions keep the owner from selling the building to the council to be knocked down and replaced with student flats.

The Carlton Cinema building’s future didn’t look too good, as it was closed on 1st November 2007. It was demolished in December 2010.

The cinema closed as the ABC (under the ownership of Odeon) on January 2 2003. A petition was signed by several locals in favour of keeping the cinema open. On January 24, the small independent chain Reeltime Cinemas acquired the lease on the building and reopened it renaming it back to its original name of Carlton Cinema.

Unfortunately, despite a huge protest to keep the movies rolling, support for the Carlton was poor mainly due to competition from two nearby multiplexes. So on 30 March 2005, Reeltime decided to close the site and it was reopened again on April 1 2005 under the ownership of Cineplex Cinemas and was renamed as the Cineplex.
Within less than a year, the site was under threat of closure again, but an independent operator stepped in and reopened it under its former name.

DOES ANYONE HAVE THE NAME OR/AND CONTACT DETAILS FOR THE FREEHOLD OWNER OF THIS PROPERTY ?

WE WOULD BE VERY INTERESTED IN A NEW LEASE ON THIS CINEMA. PROFESSIONAL MANAGEMENT CAN TURN THINGS AROUND.

The Cinema Building is ownned by a David Webber based in Farnham, Surrey and is operated by Star Cinemas Ltd.

Last week it was reported in “The News” that the Cinema owners have applied to Demolish the Cinema to build about 30 Flats on the site.

The Public were only given a week to submitt any objections with Portsmouth City Council and the Cinema Manager has started a campaign to save the cinema from closure.

Have just heard the news about the proposals to demolish the Carlton cinema and put up a block of flats. I have supported this cinema quite often in recent years. It was here where I saw the original, The Exorcist, when it was screened here as a one off. It has great character and I hope the manager is successful in his campaign to save the place from the bulldozers. Too many of these wonderful suburban palaces have gone over the years and let’s not let the Carlton be one of them – I urge people to get down there and sign the petition!

The latest News on this is the Owner/Developer has withdrawn their Application to demolish the Carlton and the building of 32 Flats on the site.

The Portsmouth City Council Planning Officers had advised to reject the present application as the site was unsuitable for Housing and also the Cinema stands on a early Medieval site.

The present Cinema Operator has decided to close the Cinema on Thursday 1st November, dispite the resent news on the failed application.

Unless another Cinema operator can step in and take over the Cinema will be closed and the fittings sold off and the building will be left in a derelict state.

The last film being screened will be “The Majestic” (PG) and is showing on Thursday 1st November.

Local TV & Press have been on site to report the pending closure and more coverage is expected on the closing night.

It is extremely sad to hear that the Carlton looks set to go the way that so many of the High Street traditional cinemas have gone over the years. The venue was under great competitive pressures from two multiplexes (I never go near a multiplex, not if I can help it) in the Portsmouth area. I have supported this charming venue a lot between 2003-2007 and since then it has changed hands no less than three times since Odeon gave up the lease. I really do believe that somebody should acquire the lease and transform the place into an arthouse venue as I think that it would stand a better chance of survival if the Carlton went in that direction. A number of traditional cinemas that have survived the arrival of the multiplex are now arthouses, The Little Theatre Cinema in Bath, being a good example.

The Carlton cinema was hit by a 250kg bomb on 05 December 1940, which exploded in the projection room. Over fifty out of the 250 people who were in the cinema at the time were either killed or injured.

Photos from 1986 when it was operating as the Cannon here:–

I am sorry to say but this lovely cinema is no more. Some recent photos on the 28Dayslater web site show it’s demolition.